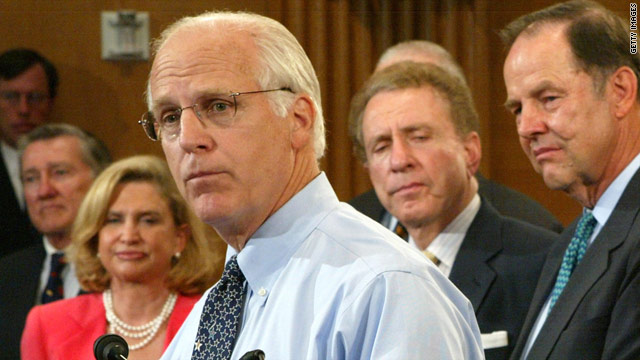 (CNN) - Chris Shays, a former Republican congressman who lost his Connecticut seat to a Democrat in 2008, announced Wednesday he was challenging wrestling executive Linda McMahon in a GOP primary for the Senate seat opening up in the state.

Speaking in Hartford, Shays said the 2012 election was too important to send a political novice to Washington.

"We can't afford to send someone to the United States Senate who doesn't have the experience and a proven record of getting things done in Washington," Shays said, according prepared remarks. "There is no time for on-the-job training. We need someone who is ready on day one."

Shays represented Connecticut in the House for 22 years, beginning in 1987. For at least one session of Congress, he was the only Republican member representing New England. He was defeated in 2008 by Democratic Rep. Jim Hines.

Shays will compete with McMahon to run for the seat now held by retiring independent Sen. Joseph Lieberman. McMahon previously ran for Senate in 2010, when she spent tens of millions of dollars on an unsuccessful bid against Democratic Sen. Richard Blumenthal.

McMahon announced she was running for the Republican spot in September. She is the wife of Vince McMahon, the chairman of the professional wrestling organization WWE and a former professional wrestler himself. Linda McMahon served as president and CEO of the company until she launched her first bid for Senate in 2009.

In his announcement, Shays struck upon anger many Americans feel toward Congress, saying he would work to change a system in which little seems to get done.

"So many Americans have lost their jobs and are losing their homes," Shays said. "I cannot, and will not, sit on the sidelines and watch this happen. The madness in Washington cannot continue. Washington is broken, the Senate isn't working. Nothing is getting done."

A statement from McMahon Communications Director Erin Isaac framed the race as a contest between a Washington insider and a reformer from the outside.

"For nearly 20 years, Chris Shays represented the people of Connecticut's 4th district in the United States Congress," Isaac said. "But in 2012, we need to elect people committed to changing not only the negative political culture, but the ineffective way Washington does business. Linda comes from the business world. She has known failure and success and will take a different perspective to Washington – a perspective desperately needed."