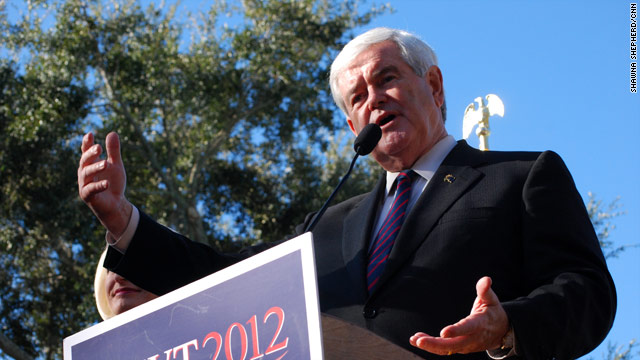 Gingrich coup conspirator: Gingrich has 'mellowed' and is 'electable'

Washington (CNN) - South Carolina Republican Lindsey Graham was so fed up with Newt Gingrich's leadership as speaker in the 1990s, he helped organize a coup attempt and even held meetings about it in his Capitol office when he was a member of the House.

But now, Senator Graham tells CNN he believes Gingrich – who last week won the South Carolina primary in a landslide – has "mellowed," and even says he is "electable" and believes he would make a good president.

"I know Newt's baggage. So does everybody in the country. But there is no better messenger for the conservative cause than Newt," said Graham.

A day earlier, Graham's close friend Sen. John McCain, who has endorsed Mitt Romney, told reporters he believes Gingrich is unelectable – saying Gingrich's "leadership style was a major factor in giving him lack of support for re-election as speaker."

In a brief interview with Graham in his Senate office Thursday, he not only split with McCain about the presidential race – he brought up the fact that people questioned McCain's temperament when he was running for president four years ago.

"I've heard people say that John was too unsteady to be President," he said.

Graham was first elected to Congress in 1994, the year Republicans took the House under Gingrich's leadership.

"I drank the Kool-Aid. I was a Contract with America baby," said Graham, talking about the 1994 reform plan Republicans ran and won on that year.

Though few Republicans who served under Gingrich in the House will criticize him publicly, many do so privately, and few GOP House members during the Gingrich era or who are now serving have endorsed him. Many have endorsed Romney.

Graham's positive words about Gingrich came just as former Senate Majority Leader Bob Dole, who served alongside Gingrich in the 1990s, wrote a scathing open letter ripping Gingrich as a "one man band" who, as GOP nominee, would result in a "landslide victory for Obama and a crushing defeat for Republicans from the courthouse to the White House."

"He seems to be not so full of himself. Confident – but not to a fault," said Graham.

"He's reaching out to people. I think he understands how sobering it would be to be president."

Graham conceded that Gingrich, at times, "was very volatile, erratic," and said he made a "lot of mistakes."

But Graham says now, looking back, he realizes that leading is "a lot harder than I thought."

"What he had to do, lead a revolution and govern at the same time, I appreciate more today than I did then. We were too hard on him. But he, again, made plenty of mistakes," said Graham.

"Being a backbencher throwing bombs because you're not pure is a lot of fun, but governing the country is a lot harder," he said.

Graham insisted he is not endorsing Gingrich, and says he believes Romney is "eminently electable" as well.

"Winning is my primary goal," he said.