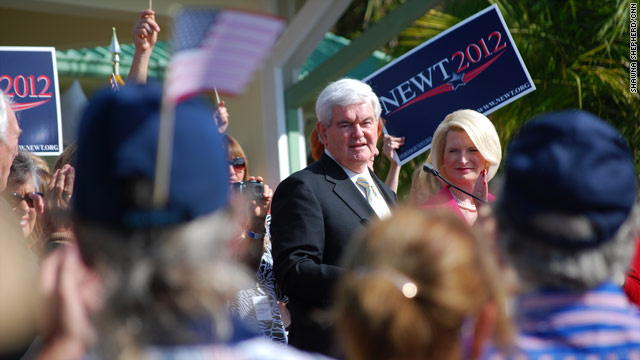 Winter Park, Florida (CNN) - Newt Gingrich cautioned against crowning Mitt Romney the Republican presidential nominee and pushed his own Washington experience as the answer to the nation's woes as he campaigned in Florida on Saturday.

"We have to have a conservative, otherwise we're going to be as frustrated with the Republican as we were with the Democrat," Gingrich said before an audience of hundreds here at Aloma Baptist Church. "We've tried an amateur for the last three years, and the truth is while he may be good at business, Governor Romney has never had one day of experience trying to get something done in Washington on a scale, on a big scale."

The former House speaker emphasized his decades of experience in Washington by noting, "I've been around longer than some of you have been alive."

He touted his long conservative track record as the key to beating President Barack Obama.

"I believe I have a dramatically better chance of winning this fall than anyone else we could nominate given the current field," he said.

Speaking to an evangelical audience in Winter Park, Gingrich mentioned his other opponent, former Pennsylvania Sen. Rick Santorum, with whom he is competing for the conservative vote.

He resurrected a South Carolina argument that conservatives need to coalesce around one candidate.

"Please just try to convince your friends, the only effective, practical conservative vote on Tuesday is for Newt Gingrich, because that's just a fact," he said.

As he was saying he has "great respect for my good friend Rick," someone in the audience yelled "next time around." Gingrich echoed the sentiment.

"Next time around is a good battle cry."

Gingrich began Saturday along the coast with stops in Stuart and Port St. Lucie. In the afternoon his campaign bus made its way to central Florida to speak at two events in Orlando and the church forum nearby in Winter Park. He'll conclude the day with a speech at the Palm Beach Lincoln Day Dinner.

At a number of campaign stops ranging in crowd size with varied enthusiasm, the former speaker made the case against a Romney nomination by reminding Floridians what happened to past GOP presidential candidates including former Sen. Bob Dole and Sen. John McCain.

The former speaker exuded confidence after his speech on a putting green at the PGA Learning Center, telling reporters he expects to go all the way to the convention and he will win the nomination.