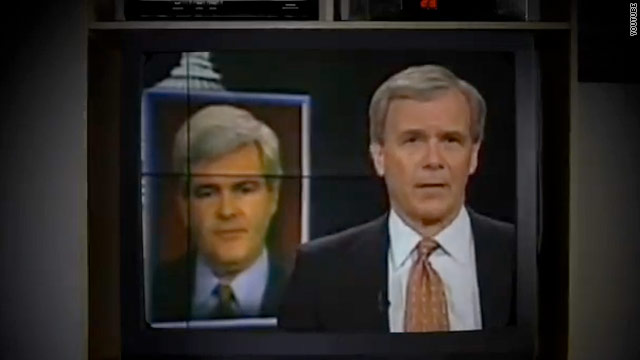 Airing in the Sunshine State, the commercial zeroes in on the former House speaker’s reprimand from Congress over a 1997 ethics violation.

“Newt Gingrich, who came to power, after all, preaching a higher standard in American politics, a man who brought down another speaker on ethics accusations, tonight he has on his own record the judgment of his peers, Democrat and Republican alike,” Brokaw said, adding details about the charges against Gingrich.

The ethics violation in question occurred after Gingrich taught a course at Kennesaw State College. While organizers claimed the course qualified for tax-exempt status, the House Ethics Committee ultimately decided the course was run to "help in achieving a partisan, political goal,” making it ineligible for tax exemption, according to PolitiFact.

The body acted with overwhelming bipartisanship to reprimand Gingrich through a bill titled "In the Matter of Representative Newt Gingrich." Voting in favor were 196 Republicans, 198 Democrats and one independent. Voting against were 26 Republicans and two Democrats. With 88% voting in favor, it was the first time the House had disciplined a sitting speaker.

While Romney frequently attacks Gingrich for “resigning in disgrace,” the former House speaker, technically, did not resign from his position. He was reelected to the 106th Congress but declined to keep his seat for a third term as speaker.

Gingrich paid a $300,000 reimbursement fee for legal expenses and costs incurred by the investigation.

Explaining the incident, Gingrich told CNN Chief Political Correspondent Candy Crowley last week that he urged fellow House Republicans to vote “yes” on the ethics charges in order to expedite the process and move on to balancing the budget.

“I personally asked House Republicans to vote ‘yes’ because we had to get it behind us to get back to the things that mattered,” Gingrich said on CNN’s “State of the Union.”

In a statement Saturday, Romney’s campaign accused Gingrich of trying to “rewrite history” of the reprimand.

“As a historian, however, he should know that such efforts usually fail,” said Ryan Williams, a Romney campaign spokesman.

Responding to the new ad, Gingrich's campaign pointed to a report from the Internal Revenue Service in 1999 that concluded Gingrich had not violated any tax laws.

"The...course taught principles from American civilization that could be used by each American in everyday life whether the person is a welfare recipient, the head of a large corporation, or a politician," the report said.

But the report did not exonerate Gingrich from a misleading letter in the investigation that later became central to the ethics charge and the basis for his $300,000 penalty.