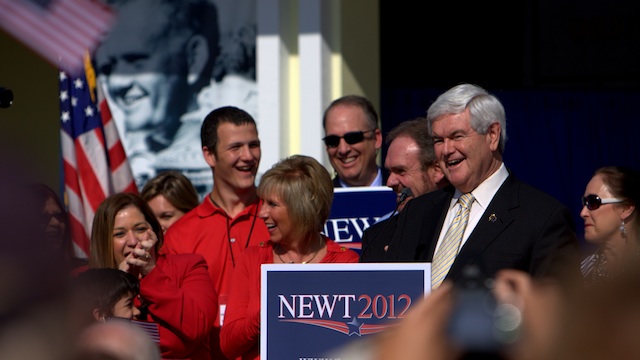 Tampa, Florida (CNN) - Not many people would associate Newt Gingrich with rap music, but now one can, thanks to three enterprising Florida teenagers who wrote "Hoot for Newt."

People who showed up early for Gingrich's speech in Port St. Lucie heard the song for the first time. The song did not play while Gingrich was at the event but they presented him with a CD afterward.

Johnson's mother, Robin, is a Gingrich county co-chair and was involved in organizing the "two scoops for Newt" event at the PGA Center for Golf and Learning.

Robin said her son and his friends often jam together and suggested they write something original for the event.

Among the song's lyrics:

"Go ahead ask what your country can do for you because anything's possible with president Newt. Yeah, so get up off your feet. Get up on the street and tell everyone you meet.

"Rap's kind of new to us. We're all rockers," said James, who wrote and recorded the song in one night during a sleepover with his friends.

"We were trying to think of a way to do publicity for Newt. All the kids listen to rap so that's what we did," he said.

Arcia could not make the event but Johnson and Hurtado got their picture taken with the presidential candidate.

Member of Gingrich's advance staff signed off on playing "Hoot for Newt" before the event. It likely won't replace the country music that plays in a loop at most events, but Johnson, Hurtado and Arcia's song is sure to make the rounds online.