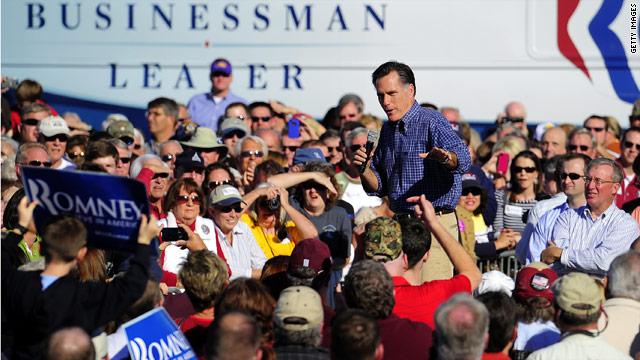 Panama City, Florida (CNN) - After largely ignoring Newt Gingrich in a series of campaign stops, Mitt Romney on Saturday called his chief GOP rival "a very nice fellow" and "a great guy with a lot of great ideas."

But Romney wasn't calling a truce in the drawn-out battle between the two front-runners for the Republican nomination. Amid the compliments, the former Massachusetts governor aimed a flurry of blows at Gingrich over his leadership as House speaker.

"He's an historian. But that doesn't give him the right to rewrite history," Romney said to an audience of several hundred at a ship building plant in Panama City. "He was fined for ethics violations. He ultimately had to resign in disgrace. He can't rewrite history."

Romney's turnaround was notable after a series of appearances during which the candidate did not mention the former speaker by name, or named Gingrich only when mocking his comments about two debates this week.

In Panama City, however, Romney reminded the audience they could help him clinch the nomination by turning out to vote in Florida's primary January 31.

"Now I'm speaking to you today as though I'm already the candidate for president for the Republican party," he said. "But I'm not. I've still got some primaries to go through."

He told the audience that Gingrich had "failed" to lead the party during his speakership.

"We have to go back and look at history and say he may be a great guy with a lot of great ideas, but he is not the leader we need at a critical time," Romney said.

In an appearance earlier in the day, Gingrich called Romney a "dishonest" debater and signaled he would not abandon his bid were Romney to win in Florida.

"I will go all the way to the convention," Gingrich told members of the media in Port St. Lucie. "I expect to win the nomination."