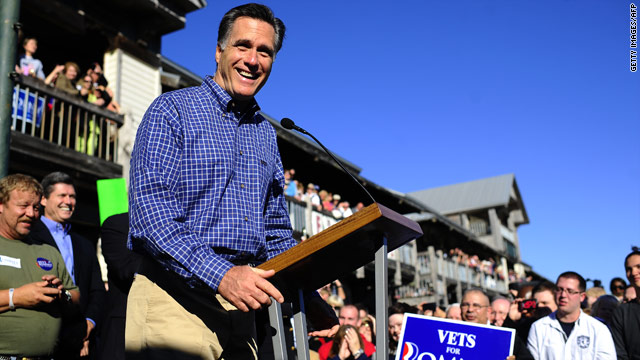 Pensacola, Florida (CNN) - In a rally that at times seemed more like a stand-up comedy routine, a host of high-profile supporters joined Mitt Romney on stage at a picturesque Pensacola restaurant Saturday.

Actor Jon Voight, who was a steadfast and outspoken supporter of former New York Mayor Rudy Giuliani in 2008, addressed the audience along with Sen. John McCain, Virginia Gov. Bob McDonnell and Rep. Jeff Miller of Florida.

The GOP stalwarts spoke to group of several hundred voters who wrapped around staircases and a deck at The Fish House, a rambling outdoor restaurant overlooking the Pensacola Bay.

For his part, Voight stuck to a serious endorsement of Romney, calling the candidate "a man of faith, honor, love, and truth" who would reverse what he called a decision by President Barack Obama "to follow (Obama's) father's footsteps and take us to socialism."

Then the jokes began. Reprising a cadre of well-worn but always popular zingers, McCain charmed the audience at what the campaign billed as a veterans event.

In jest, the 2008 Republican presidential nominee urged the audience to "vote early and vote often."

"Don't let me hear on Wednesday morning that you forgot to vote," he warned. "We have surveillance cameras."

His one-liners extended to introducing his fellow Republicans on stage.

"My friends, it's hard trying to do the Lord's work in the city of Satan," McCain said to laughter as he introduced Miller, the Florida congressman.

He nodded to Voight's role as a villain in the popular television series "24," which pitted American hero Jack Bauer against a range of evil-doers and terrorists.

McCain told the audience he was "frightened the whole time" watching Voight's character.

"Didn't you learn to love to hate this guy? Wasn't he a threat to America and the world? Thank God for Jack. God bless Jack, thank you," McCain said to laughter in the audience. "Jack Bauer killed him three or four times, thank God."

Speaking after McCain and remarking on his supporter's successful "repartee," even Romney decided to join in on the fun, making a joking allusion to Voight's famously difficult relationship with his daughter, the actress Angelina Jolie.

"I didn't know how to sort of chit chat with a famous actor like that," Romney said of a phone call with Voight. "I started talking about my five boys. I said, you know, it's easier to raise boys than girls. Well - long pause. He says, tell me about it."

The GOP candidate then told a joke about governors, noting he was joined by two such state officials that morning.

"There's this farmer and he was driving this truck, this livestock truck. He is driving along and he was going too fast and a trooper pulls him over, comes up and says you are going too fast, don't you have a governor on this thing?" Romney told the audience. "He says, no, the smell you smell is from the animals in the back."

Romney spoke for roughly 14 and a half minutes and did not take audience questions.