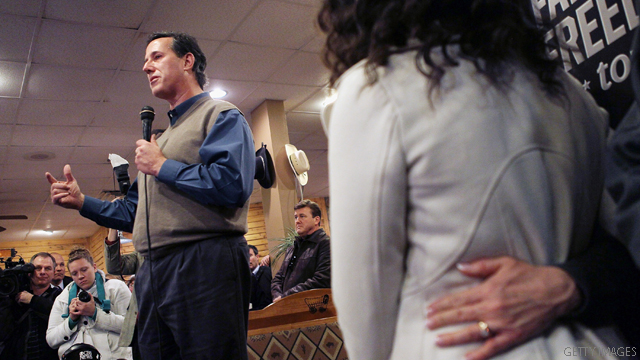 A campaign aide confirmed prior to the event that Bella, as her family calls her, returned to the hospital on Saturday because she had contracted pneumonia in both of her lungs, but as she was not placed on a ventilator the family is hopeful she'll make a speedy recovery.

The highest profile surrogate was Santorum's 20-year-old daughter, Elizabeth, who was clearly emotional when she arrived at the private airport before the rally. She took the stage last, following her father’s Florida chairman and several members of the Duggar family from the TLC reality-TV show "19 Kids and Counting."

"My dad today is exercising his most important role, which is being a dad," Elizabeth Santorum said told the crowd of roughly 250 people.

Last Tuesday at an identical event sponsored by the Republican Party of Sarasota, Newt Gingrich attracted thousands to the same hangar.

Although she stayed away from the issue of her sister's health during her largely positive four-minute address, Elizabeth Santorum spoke briefly to members of the media after the event, declining to give any details of her sister's condition.

"She got sick and right now she's in the hospital and we're hoping and praying she will be better soon," Elizabeth Santorum said.

Bella suffers from a chromosomal condition called Trisomy 18 caused by extra material from chromosome 18. It is three times more common in girls than boys, and patients who survive past the first week experience serious medical and developmental problems, according to the National Institutes of Health. Bella spent much of her first year of life in the hospital, but the Santorum family has primarily been able to care for her at home since then.

"We do what we do as a family. We stick together and we get through and we are hanging in there," Elizabeth Santorum told reporters, adding that her father would be back in Florida "as soon as he can, and right now family comes first, being a dad and being a husband right now, so that's why he's home."

Josh Duggar, the oldest of the Duggar's 19 children, was quite pointed in his criticisms of Santorum's GOP opponents, laying into Mitt Romney for allowing abortions to be covered under his Massachusetts health care reform.

"The man who said he had a change of heart, he had an epiphany, he had this moment where he became pro-life - this man still has not went back and made that right," Duggar said. "And women in Massachusetts still walk in, and basically off the hand of Gov. Mitt Romney, they can get an abortion for $50."

Duggar also hit Romney for his support of gays and lesbians as governor.

"In '04 or '05 he issued a declaration saying that basically that homosexuals and homosexual lifestyles should be encouraged and he made a declaration from the state as governor that that should be accepted in society," Duggar said. "This man is not someone who is on our side."

Incorporating Gingrich into his final attack, Duggar ended by saying, "Both of these men have been on both sides of the issues that you and I hold dear."