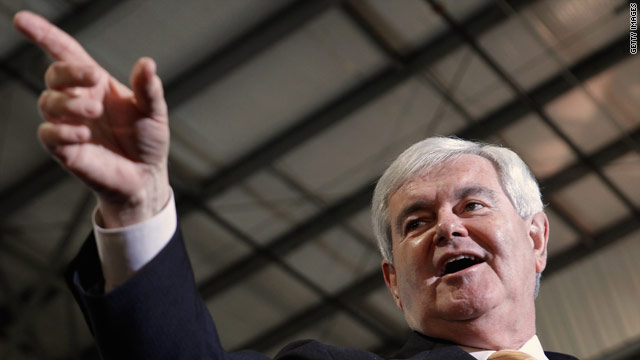 Campaigning in Fort Myers on the eve of the Florida primary – his fourth stop on a statewide fly-around - Gingrich took the stage in a parking lot at the local airport to address several hundred supporters, many of whom had been waiting in a pleasant breeze for nearly two hours to see the candidate.

Gingrich promptly launched into a diatribe about the "profoundly false" blizzard of ads from the Romney campaign and his allies attacking Gingrich's record in Washington and ties to the troubled mortgage firm Freddie Mac.

He cited a New York Times piece from Sunday examining a Romney campaign meeting on the morning after their drubbing in the South Carolina primary.

In the meeting, Gingrich said, referring the Times piece, Romney and his aides settled on a plan to "destroy" the former House Speaker in Florida.

"And I thought to myself, what a pathetic situation to be running for the President of the United States with nothing positive to say for yourself," Gingrich said.

"And nothing available, a big idea, big vision, a big future, and all you got to do is try to tear your opponent down to where they get smaller than you are. That's the Romney model. Now that's not my model. My model is to talk about big solutions."

Gingrich was introduced at the Fort Myers event by Herman Cain, who endorsed him on Saturday, and Michael Reagan - both of whom defended Gingrich's conservative bona fides.

Cain, though, left the rally before Gingrich spoke in order to make an appearance on Fox News.

Gingrich also revealed in his speech that one of his most famous supporters, Todd Palin, will hit the campaign trail with him soon. The campaign said Palin recorded a last minute get out the vote robocall for Gingrich that will go out in Florida on Tuesday.