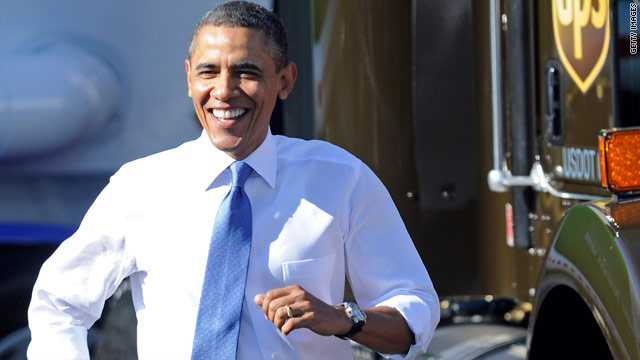 In a memo to reporters, Obama for America Pollster Sergio Bendixen and Director of Hispanic Press Gabriela Domenzain suggest the two leading GOP candidates had alienated Latino voters with ramped up anti-immigration platforms.

"Their extreme rhetoric on immigration during the televised debates has rejected our history as a nation of immigrants and alienated millions of Hispanic voters nationally," the memo said. "Many Hispanics see Romney's strong opposition to the DREAM Act and to any type of comprehensive immigration reform as more of a demagogic appeal to Tea Party voters than an attempt to formulate a responsible policy."

Romney firmly pledged in December to veto the DREAM act if it reached his desk as president. The proposed legislation would offer a path to citizenship for minors in the country illegally, providing they served in the armed forces or attended college. The initiative has not gained enough support to pass Congress despite several attempts.

Gingrich has said he would support at least one facet of the DREAM act, agreeing to allow for a path to citizenship for illegal immigrants who sign up to serve in the military.

The Obama campaign officials assailed Gingrich for his comment that Spanish was "the language of living in a ghetto," saying the statement was "offensive at face value to Hispanics and neutralizes any credit he may have received for supporting legal status for "undocumented abuelitas."

Gingrich has argued that he was advocating for bilingual education when he made the comments, saying he wanted students to learn English to advance economically.

"The speeches and policy statements of both Romney and Gingrich on issues like the economy, the creation of jobs, health care, public education, housing, programs for seniors, and immigration are deeply unpopular with most Hispanics," the memo said.

Bendixen and Domenzain suggested in the memo Obama was poised to soundly defeat a Republican in the November general election, citing a Univision/Latino Decisions poll showing Obama defeating Newt Gingrich 70% to 22% and Mitt Romney 67% to 25%.

Responding to the Obama campaign's memo, the Republican National Committee pointed to a poll from the Pew Hispanic Center showing Hispanics feel they have been hit hardest by the economic downturn. The RNC said those figures would hurt Obama among the key voting group.

"With all eyes on Florida and the latest polls showing Obama's approval rating struggling amongst Hispanics, it is no surprise that the Obama campaign is desperately trying to gain their support by releasing a memo on how they plan to pander to Hispanic voters," RNC Spokesperson Alexandra Franceschi said.

She continued, "Obama has a Hispanic problem because Hispanics across the country have been disproportionately hurt by Obama's abysmal economic policies, and are ready for a change in direction in Washington. With the economy and jobs polling as the top issue for Latinos in this election, Obama will be hard pressed to convince Latinos to support the same failed policies."

Both Gingrich and Romney are campaigning heavily in Florida ahead of the state's primary Tuesday, and are making major efforts to reach the state's large Latino population. In 2008, Sen. John McCain took 54% of the Latino vote in Florida, compared to 14% who voted for Romney.

Nationally, Latinos overwhelmingly supported Obama in the 2008 general election, with 67% voting for Obama compared to 31% who backed McCain.

Politicians seeking to court the Latino vote face a bloc with diverse populations that don't always coalesce around a single point of view.