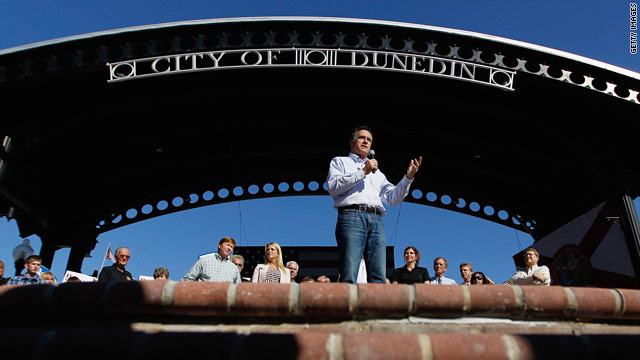 Tampa, Florida (CNN) - It's primary day in the Sunshine State, but more than 600,000 people have already voted in Florida's Republican presidential contest. And a new public opinion poll indicates that the ballots already cast may help former Massachusetts Gov. Mitt Romney take the 50 delegates up for grabs in Florida's winner take all primary.

Early voting began statewide ten days ago, and according to figures released Monday afternoon by the Florida Department of State, which runs the division of elections, 293,760 people had already cast ballots. And according to the state, more than 531,000 people requested and were sent absentee ballots, and 338,753 were returned and received by Florida officials.

Add it all together and more than 632,000 votes were already cast before primary day. To put it in perspective, that's more than the 601,577 who voted in the South Carolina primary, and far outpaces the combined 360,000 that took part in the New Hampshire primary and the Iowa caucuses.

And according to an American Research Group survey released Tuesday morning, 36% of people questioned said they already voted, and among those, Romney led former House Speaker Newt Gingrich 51% to 29%, with former Sen. Rick Santorum of Pennsylvania at 12% and Rep. Ron Paul of Texas at 10%.

Sixty-four percent said they would vote on primary day, and among them, Romney had a much smaller 39% to 32% advantage over Gingrich, with Santorum at 14% and Paul at 10%.

Overall, 43% of likely Florida Republican primary voters said they were backing Romney, who's making his second bid for the GOP nomination, with Gingrich at 31%, Santorum at 13% and Paul, who's making this third run for the White House, at 9%. The ARG poll is the fifth survey released over the past 48 hour hours to indicate Romney holding a double digit lead over the rest of the field.

According to the poll, Gingrich holds a 38%-35% margin over Romney among supporters of the tea party movement, with Romney holding a large 29 point lead over Gingrich among those who say they are not tea party supporters.

The American Research Group poll was conducted Sunday and Monday, with 600 likely Florida GOP primary voters questioned by telephone. The survey's sampling error is plus or minus four percentage points.