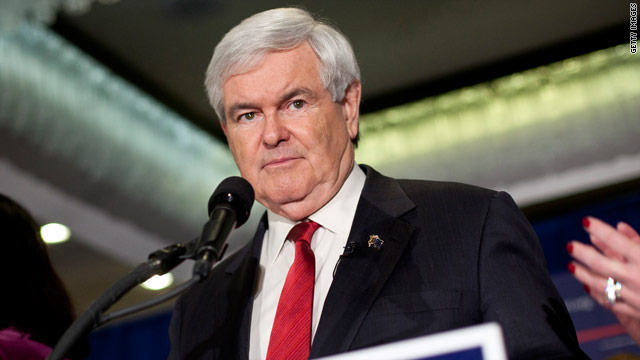 (CNN) - Newt Gingrich denied any knowledge of a robocall put out by his campaign Tuesday claiming rival Mitt Romney refused to fund kosher food for Holocaust survivors during his time as Massachusetts governor.

Gingrich's campaign spokesman R.C. Hammond confirmed the calls were going out statewide in Florida Tuesday. The call's claim that Romney vetoed a bill providing kosher meals to nursing home residents during his time as governor first arose Monday, when Gingrich cited a report from the New York Post.

The robocall begins by saying: "As governor of Massachusetts, Mitt Romney vetoed a bill paying for kosher food for our seniors in nursing homes. Holocaust survivors, who for the first time, were forced to eat non-kosher, because Romney thought $5 was too much to pay for our grandparents to eat kosher."

Gingrich's robocall then urges voters to cast votes for Gingrich, saying, "Tuesday you can end Mitt Romney's hypocrisy on religious freedom, with a vote for Newt Gingrich."

At a campaign stop in Plant City, Florida, Gingrich denied any knowledge of the robocall, despite his campaign claiming responsibility for it.

When asked if the call was "over the top," Gingrich said, "I have no idea what you're talking about."

When pressed, Gingrich said he wouldn't comment about the call since it was "something I don't know about."

Gingrich first made the claim about Romney's kosher food veto Monday, telling an audience in Jacksonville he read about the veto over the weekend.

The New York Post reported Friday on a veto Romney cast in 2003 that rejected "$600,000 in additional funds for poor Jewish nursing-home residents to get kosher meals."

The veto was one of hundreds of line-item vetoes Romney made as governor during a time of fiscal crisis in Massachusetts.

"It's sad to see Speaker Gingrich lashing out in a desperate attempt to try and save his floundering campaign," Saul said. "Speaker Gingrich will say anything to distract voters from the fact that he suffered an unprecedented ethics reprimand, was forced to pay a $300,000 penalty, and resigned in disgrace at the hands of his own party. His record is one of failed and unreliable leadership and simply one Americans can't risk."