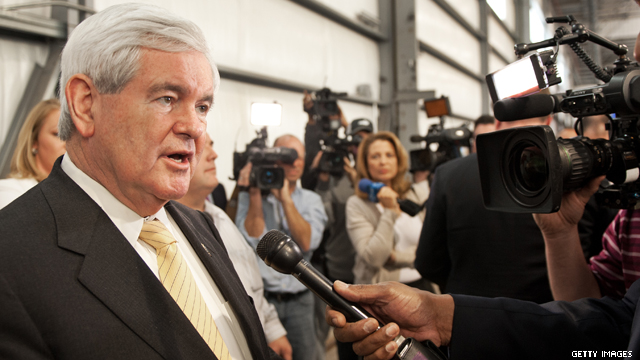 (CNN) – For much of the election cycle, Newt Gingrich has been challenging President Barack Obama to Lincoln-Douglas style debates, modeled after the long philosophical discussions between Abraham Lincoln and his opponent Stephen Douglas in 1858.

The Republican White House hopeful took his proposal a step further on Monday, saying he would not accept a debate moderated by reporters should he win the nomination and campaign against Obama in the fall.

"The reporters who run the debates have no interest in asking any question which will affect Obama," Gingrich said at a Pensacola rally ahead of Florida's critical primary. "We don't need to have a second Obama person at the debate."

Gingrich has repeatedly called for a series of the three-hour, moderator-free debates with Obama, threatening to follow the president on the campaign trail during the general election until he agrees to the debates.

Gingrich has not shied away, however, from attending any of the journalist-moderated primary debates so far. And there are more coming, with CNN hosting a debate in Arizona on February 22.

The former House speaker has been vocal about his distrust of journalists, most notably making headlines after lambasting the news media at a South Carolina debate on the heels of an ABC News interview with his ex-wife.

At the time the interview aired, polling in the Palmetto State showed Gingrich had closed the gap on rival Mitt Romney with support growing for the former speaker's candidacy.

When asked during CNN's South Carolina debate if he wanted to address the controversy, Gingrich pivoted off of it to criticize the media, a topic that always plays well with conservative primary voters.

Describing the debates as a "game show approach," Gingrich said in a Fox News interview Monday that reporters should not have the authority to "decide what question matters."

"They get to decide what topic to bring up," Gingrich said. "I think that's absurdity."

The Commission on Presidential Debates announced last fall the dates and locations for four general election debates in October. The schedule includes three presidential debates and one for the vice presidential nominees.

According to the commission, debate moderators will not be selected until the summer. In the last election cycle, the moderator list included high-profile journalists, including Jim Lehrer and Gwen Ifill of PBS's "NewsHour," Tom Brokaw of NBC News, and Bob Schieffer of CBS News.