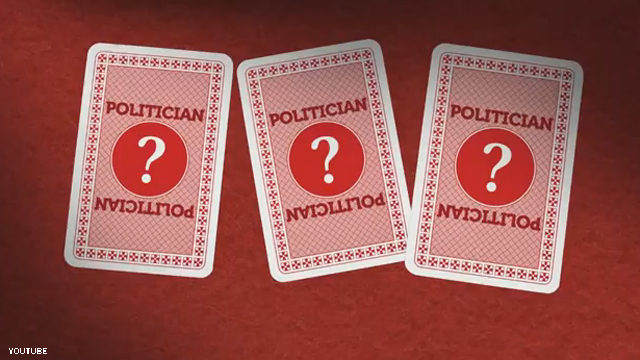 Santorum puts down a marker in new ad

(CNN) – Looking beyond Florida's primary, Rick Santorum's campaign on Tuesday released a blistering new television ad set to air in Nevada ahead of the state's caucuses.

But the negative commercial features "opponents" not typically mentioned in ads put out by Santorum's campaign.

The one-minute spot, "Deal," teases the viewer by showing three animated playing cards with questions marks on the back.

"On the other sides of these cards are the picture of three politicians," the narrator says. "Here's some clues as to who they are."

All three lawmakers, the ad says, supported cap and trade legislation, supported "giving illegal aliens some form of amnesty," and favored government health mandates that make up the "core of Obamacare."

"Who are these three Cap and Trade lovin', bailout supporting, soft of immigration, big government mandating politicians?" the narrators asks.

While one of the cards shows GOP presidential rival Newt Gingrich, the other two cards reveal an unexpected Democratic duo of President Barack Obama and House Minority Leader Nancy Pelosi.

"Now you know," the narrators says.

Pivoting to Santorum, the ad shows images of the former senator on the campaign trail, as the narrator describes him as a candidate who "doesn't just talk a good conservative game, he lives it."

Santorum, who's trailing in third place behind Gingrich and Mitt Romney in national polls, has largely bypassed Florida to focus instead on western states that hold nominating contests in the coming weeks.

The ad will start airing statewide Wednesday on Nevada cable television and run through Saturday's caucus day. It will also run in Colorado until the state's caucus day on Tuesday.

In addition, Santorum's campaign will start airing a positive ad, "Quotes," in both states within the next week. The campaign added it may expand both spots to broadcast networks later in the week.