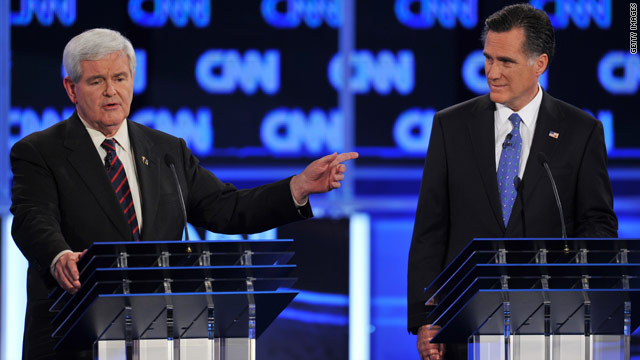 (CNN) – Dealt a thorough thumping on election night thirty years ago, George McGovern didn't pick up the phone to concede the race to Richard Nixon – instead, the South Dakota senator sent the incumbent president a telegram.

The cordial concession call is as much political tradition as it is campaign stagecraft, a pleasantry otherwise sparse in campaigns, such as this Florida's contest, rated the most negative ever in a campaign advertisement analysis. But on Tuesday night, the call for Florida victor Mitt Romney didn't come, at least from one candidate.

"The other candidates all called, but I guess Speaker Gingrich doesn't have our phone number," Romney said of former House speaker Newt Gingrich on NBC's "Today."

But whether the two need exchange numbers or not, the lack of a concession highlights that no love is lost between the rivals, whose campaigns and supporters have paid hefty sums and unleashed a barrage of negativity in ads, debates, and on the stump. And that, perhaps, the lessons of history have been lost or, at least, put aside for now.

One of Gingrich's daughters defended her father's no-call in a CNN interview on Tuesday evening.

"I'm not really sure I would say it's graceless," Kathy Gingrich Lubbers told CNN's Piers Morgan. "What it is, is the reality that he's moved on and we're looking forward to the next 46 states."

Tradition says some form of intra-party communication is in order. For instance, in the heated 2008 Democratic primary, then-Senators Barack Obama and Hillary Clinton reportedly exchanged calls and voicemails as they raced to amass delegates.

But the presidency, the ultimate prize to some, attracts ambitious competitors who aren't necessarily afraid to step over one another. In the nation's first contested presidential race, over two hundred years ago, Thomas Jefferson and John Adams tangled in viciously partisan newspapers over the Jay Treaty and French Revolution. All the while, at the time, the second-place finisher would become vice president, a system which was shortly thereafter changed.

Of course, that contest pre-dated the telephone, but the two would much later in life exchange letters for years.

"The Little Book of Campaign Etiquette" by Stephen Hess puts the concession this way: "The votes are counted. The lights go out at the polling places. Yet there is still one last ritual to perform before the campaign is over. The loser gives a concession speech and the winner a victory speech (in that order)."

The concession speech is typically forward-looking, as in Romney's remarks earlier this month to supporters after Gingrich won the state.

"Tonight I want to congratulate, of course, Speaker Gingrich and my fellow Republicans at a hard-fought campaign here in South Carolina," Romney said after losing South Carolina to Gingrich last month. "We're now three contests into a long primary season."

But ever the campaign stunt, it comes with complications.

On caucus evening in Iowa, Romney emerged the victor by an eight vote margin. "My goodness, what a squeaker," Romney told supporters the next morning in New Hampshire. Two weeks later, Iowa GOP officials credited former Pennsylvania Sen. Rick Santorum with the win, by 34 votes, and Romney dialed Santorum.

As for what happened on the line, the two sides differed: Santorum's spokesperson says it was a "polite" call to "concede victory" in the Hawkeye state, but a Romney spokesperson pushed back saying the call was no concession, but rather to "congratulate."

And as soon as the call, or speech, is over, the campaign resumes.

"Just a little while ago I called Governor Romney and congratulated him," Texas Rep. Ron Paul, the fourth place Florida finisher, told supporters at a rally in Nevada on Tuesday night.

His supporters booed the idea. "No, no. We had a friendly conversation. I honestly congratulated him. He ran a good campaign," Paul said, continuing to cheers: "And also said I would see him soon in the caucus states!"