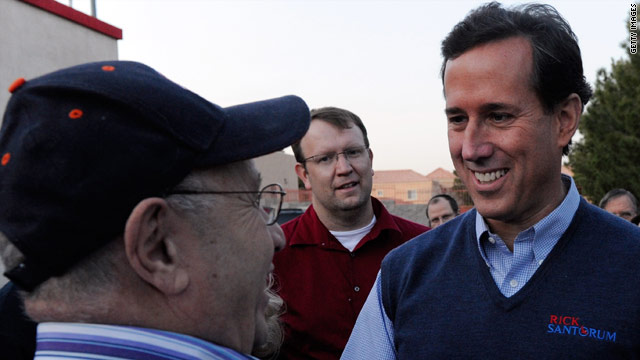 Missouri holds a non-binding primary February 7, meaning the vote will not have any impact on delegate allocation. The Show Me State then holds official caucuses March 17.

Although essentially a beauty contest in the GOP nominating race, Santorum allies think they can make a good showing in the state, leading to Wednesday's six-figure ad buy.

The Red, White and Blue Fund produced the ad, called "Trust Missouri." The group does not have ads up in other states holding contests in the next weeks, including Nevada, Colorado and Minnesota.

The ad attacks President Barack Obama, saying: "Obama's reckless agenda must be stopped. And there's only one principled candidate with the courage to do it. Rick Santorum."

It goes on to portray Santorum as the only choice for conservatives hoping to take the White House in 2012.

"Father. Husband. A champion for life. The leader with a bold plan to restore America's greatness. Create dynamic jobs, cut wasteful spending and reform Washington."
In a statement, an adviser for Red, White and Blue Fund said the group recognized the challenges Santorum will encounter moving forward.

"We are realistic about the challenge ahead," Stuart Roy said. "And in order to defeat the Obama agenda you have to defeat Obama in the fall. To defeat Obama in November means you have to have principles, a proven record and be a consistent conservative. The only candidate who fits that bill is Rick Santorum."

Roy said his group was focusing on the state because Santorum had a real shot of winning.

"Missouri is important because it is a state where Rick Santorum already holds a strong lead and where the ballot matchup is essentially Santorum versus Romney for the first time," Roy said.

Santorum, who finished third in Tuesday's Florida primary, shifted his focus after South Carolina to states further along the nominating calendar, including Nevada, which holds caucuses Saturday, and Colorado, which caucuses February 7.