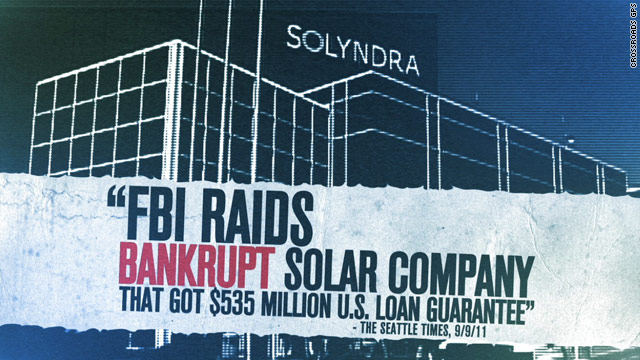 (CNN) – The day after Crossroads GPS announced an impressive $32.6 million haul in 2011, it is out with a new ad hitting President Barack Obama over his administration’s investment in Solyndra, the failed green energy firm.

“He gave his political backers billions – a big government fiasco- infused with politics at every level,” a woman says over black and white images of bundled cash and men huddled in the Capital.

The ad includes the president talking up green energy, an apparently unemployed man a park bench with his head in his hands, and closes with the female narrator saying, “Laid off worker: forgotten. Typical Washington. Tell President Obama we need jobs not more inside deals.”

The group is spending $500,000 airing the 30-second spot on cable nationwide for a week, including on CNN. It's the group's second ad targeting the president for the loss of $535 million taxpayer dollars in the Solyndra investment.

The Obama administration argues its green energy program boasts far more successes to balance out failures such as Solyndra.

In a strategy memo American Crossroads and Crossroads GPS’ CEO Steven Law writes that the ad is designed to start a debate over what he calls the president’s “Solyndra economy.”

Describing the president’s green jobs program as a “politically infected spending binge” where “participants are rewarded not for what they know, but for who they know,” the memo argues Republicans should not cede the moral argument on the economy to the president.

“President Obama has laid out the terms of a critical national debate: America is an unfair place, and more government is the solution. Advocates on the center-right need to engage that debate in both moral and economic terms, showing that Obama’s Washington is an unfair place, and less of Obama’s invasive, free-spending and chronically politicized government is the solution.”

While the memo casts the ad and the debate purely in terms of the economy and the green jobs program – something else is at play.

Democrats close to the White House say Obama consistently rates well with independent voters on his ethical standards. An ad like this could undermine that support by painting him as a typical Washington politician who would do anything to woo donors.

In an interview last month, Law said they will work to change voters perception of the president by tying him to Washington and its unpopular ways.

This ad certainly seems one step in that direction.