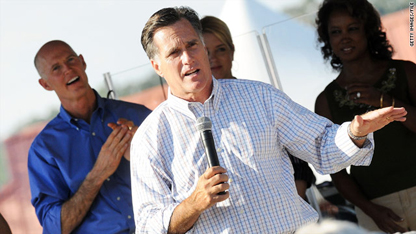 (CNN) - A new national poll indicates Mitt Romney has retaken his lead over rival Newt Gingrich after having once lost it in the days following Gingrich's South Carolina primary victory.

According the latest results from Gallup's daily tracking poll released Wednesday, Romney is now back in front one day after his decisive win in Florida's primary.

The survey, conducted Friday through Tuesday's primary day, shows the former Massachusetts governor has the backing of 31% of registered Republicans nationwide, while Gingrich has 26% support.

Those numbers were essentially reversed after Gingrich won South Carolina's contest on January 21, when the tracking poll showed Gingrich with an eight point lead over Romney just days after the first-in-the-South primary.

But as Romney's campaign and a super PAC supportive of his candidacy bombarded Florida with ads against Gingrich ahead of the state's primary, Romney's numbers steadily crept up.

Gingrich's numbers, meanwhile, dropped at the same rate and the former House speaker found himself edging Romney by only one point on the eve of Tuesday's Florida primary, a margin well within the poll's sampling error.

Gallup's tracking poll surveys more than 1,000 Republican registered voters on a daily basis, and the poll drops the oldest of five days each day and adds results from the most recent day of polling.

For the latest poll, Gallup surveyed 1,159 Republicans and Republican-leaning independents by telephone Jan. 27-31, with a sampling error of plus or minus four percentage points.