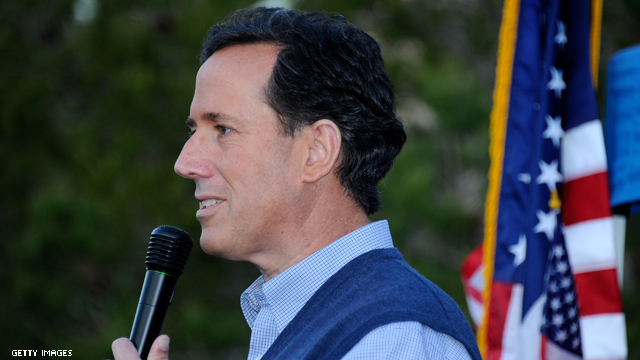 Lakewood, Colorado (CNN) - At a press conference at Colorado Christian University on Wednesday, Rick Santorum announced a slate of Colorado endorsements that he hopes will help him gain traction before the state's caucuses on February 7.

Following brief statements from those who were able to appear with Santorum at his press conference, the underdog candidate addressed his standing in the race and his recent intensified focus on Newt Gingrich, in both TV ads and public statements.

"I don't have hundreds of millions of dollars so I've got to focus my attention on where I think we can consolidate our gains," he said. To highlight one place where he could accomplish this, Santorum pointed to recent polling that asked what voters would do if their chosen candidate dropped out of the race.

"If you look at the voters who voted for me, and where they would go if I was not in the race it would be divided between Romney and Gingrich, actually more toward Romney than Gingrich," he said. "Interestingly enough, if Newt's out of the race almost all of his votes come to me."

This, Santorum argued, proved that Gingrich's supporters are backing him because they feel he can win, but "not because they necessarily think he's the best candidate." So one place where he can consolidate gains is by pointing out the troubles that Gingrich might have in a general election.

"One of us may be able to beat Mitt Romney but that's not the goal folks. The goal is to beat Barack Obama," Santorum told a crowd of 100 or so people gathered at the university.

Santorum then shifted his focus to Romney, arguing that his pitch to voters about his electability in November is also weak – but in different ways.