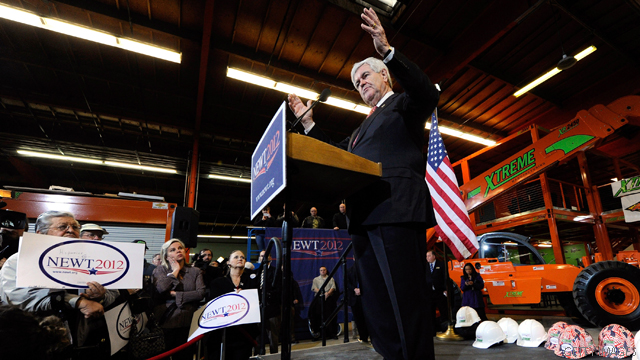 Gingrich trumped by 'the Donald'

Las Vegas (CNN) – Republican presidential candidate Newt Gingrich got trumped by "The Donald" in Las Vegas when the mogul decided to throw his support behind Mitt Romney Thursday.

Both White House hopefuls are campaigning in Nevada ahead of the state's Republican caucuses on Saturday. Gingrich's two morning events – a speech at Xtreme Manufacturing and a meeting with Hispanic business leaders – were largely overshadowed by the news that Trump was endorsing Romney, his chief rival, on the Vegas strip.

Most in the Republican field had been courting the millionaire mogul and reality television host. Gingrich met with him in New York City in early December.

But as Gingrich was checking out Xtreme's manufacturing equipment he dismissed the significance of a Trump endorsement, expressing amazement to reporters that he was getting so much attention.

Meanwhile, Gingrich continued on Thursday to take something Romney said about poor people out of context to feed a narrative about his wealthy presidential opponent.

Romney was talking about how he would help the middle class in a CNN interview Wednesday when he said he was not "concerned about the very poor" because there is a safety net in place for them but added, "if there are holes in it, I will work to repair that."

Speaking to supporters and employees in the chilly manufacturing plant, the former speaker used another analogy to describe how he would help lower income Americans.