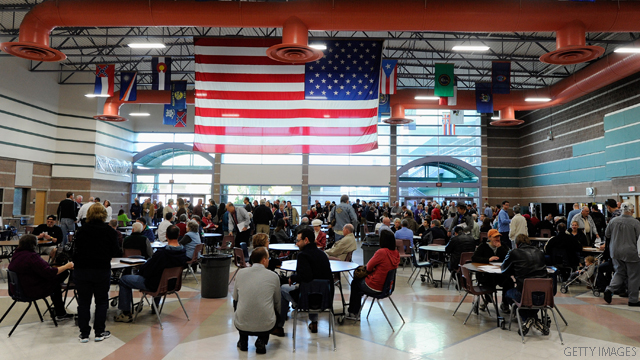 Live blog of the Nevada caucuses

(CNN) - Mitt Romney won the Nevada caucuses Saturday in the fifth state to vote on the road to the White House. The former Massachusetts governor was favored to win in the Silver State, becoming the first presidential contender this cycle to win two contests back to back. The caucuses were open to more than 470,000 registered Republicans who chose between Romney, former House Speaker Newt Gingrich, former Sen. Rick Santorum of Pennsylvania and Rep. Ron Paul of Texas.

Below is our reporting from our reporters and producers. See the results at CNNPolitics.com and on Twitter at #cnnelections. Read more here.

11:36 p.m. ET - @donnabrazile: Memo to old school politics: Newt is being Newt. Ain't pretty folks...But, the fmr gentleman from Georgia will never surrender. Get over it!

11:35 p.m. ET - When asked if he would run a positive campaign going forward, as previously reported, Gingrich said he will give positive speeches, but that it is difficult to get the media to cover positive events. Negative campaigning is part of the process, he said.

"I stayed relentlessly positive in Iowa, and I lost by 22 points," Gingrich said. "I think it is terrible the American system is reduced to negative ads, some of them false."

11:32 p.m. ET - Gingrich said he will have mechanisms to combat what he called Romney's "substantially dishonest" comments by the next debate.

"If you can't tell the truth as a candidate for president, how can the country possibly expect you to lead as president?," Gingrich asked referring to Romney's comments in the last debate in Florida.

11:25 p.m. ET - Gingrich said he intends to compete for the GOP nomination in every state in the U.S. and will be on par with Romney by the Texas primary on April 3.

"In a few more weeks I'll be ahead in Gallup again," Gingrich predicted of his national poll numbers.

11:22 p.m. ET - @jimacostacnn: Gingrich accuses Romney camp of spreading rumors that he will drop out. Calls it "their greatest fantasy."

11:17 p.m. ET - At a press conference in Las Vegas, Gingrich reaffirmed his commitment to the presidential race.

"I will be a candidate for president of the United States," Gingrich said. "We will continue all the way to Tampa."

He also criticized Romney over his "poor" comment earlier in the week, saying "I'm not comfortable with allowing people to languish in the safety net."

10:50 p.m. ET - @PeterHambyCNN: Many heads exploded in Chicago during that speech

10:43 p.m. ET - @jimacostacnn: Best Romney line so far: “This president began his presidency by apologizing for America. He should now be apologizing to America.”

10:40 p.m. ET - Referencing the president, Romney told supporters at his campaign headquarters in Las Vegas that "Nevada has had enough of your kind of help."

10:28 p.m. ET - Appearing on CNN, Santorum said he expects to do better in Colorado than he did in Nevada and even better in Minnesota. He also said he has a unique opportunity to in Missouri, where Gingrich is not on the ballot, to prove his ability against Romney. Contests will take place Tuesday in the three states.

10:06 p.m. ET - @JohnAvlon: Romney NV HQ exploding in applause and chants of 'Mitt' as data comes in showing him in pole position.

9:48 p.m. ET - @PeterHambyCNN: Newt source tells me: "There's a plan all the way to Tampa. We're going to play strategically and will have resources."

9:44 p.m. ET - @jimacostacnn: Romney's big challenge after NV is the improving economy. He says it's getting better. But not bc of Obama. Do voters buy?

9:40 p.m. ET - Santorum, addressing the Weld County Lincoln Day Dinner in Greeley, Colorado, said he refrained from engaging in "petty, personal politics" toward Romney and Gingrich because, "this race isn't about that."

9:25 p.m. ET - @psteinhausercnn reports that participants in a Las Vegas caucus, open late to accommodate Sabbath observers, were told to sign a form to declare they did not participate in earlier caucuses because of their religious beliefs. See the form here.

9:12 p.m. ET - Josh Romney defended his father's "poor" comment from earlier in the week, saying it is difficult when you're on the campaign trail "24 hours a day for a few years."

"You're going to say things the wrong way," he said.

9:07 p.m. ET - Speaking with @crowleyCNN, Romney's son Josh said there are no regrets in the Romney campaign about how he has criticized Gingrich or the ads run against the former House speaker. Politics is "a tough sport," Josh said.

9:06 p.m. ET - @David_Gergen: Do you agree? Irony of night - Romney gaining momentum in GOP race even as he loses ground in national race. #CNNElections

8:56 p.m. ET - While speaking with @GaryTuchmanCNN, Santorum said he is in Greeley, Colorado Saturday night instead of Nevada because Colorado is a state in which he can be competitive. Santorum said he's optimistic about his chances in the Tuesday caucus states of Colorado and Minnesota and primary state of Missouri.

8:48 p.m. ET - According to CNN entrance polling, 54% of caucus-goers said advertising did not impact their vote, while 41% said it did.

8:07 p.m. ET - @jimacostacnn: About all the drama about what Newt will do next? FYI, he did that in Florida too. Anybody remember 46 states to go?

7:50 p.m. ET - @David_Gergen: Lots of talk about who comes in 2nd Nevada. As best I can tell, only Romney has had good nite. #CNNElections

7:49 p.m. ET - Paul said even if he wanted to drop out of the race ahead of the convention, he couldn't because there would be a "strong rebellion with my friends."

"But we're doing so well there's no reason to think about that," Paul added on CNN.

7:47 p.m. - Paul told CNN's Wolf Blitzer that the Mormon vote played a role in Romney's lead in Nevada but that he is waiting to "see if we do have a good 2nd place coming up."

"I hope he takes the message that it's time to withdraw gracefully and not continue to divide the party. The message we heard at our caucus, and what I have heard from other people at other caucuses, was that while people stood up to talk about who their preferred candidate was, they also talked about the need come together and unite behind the nominee to increase our probabilities of success," Heck told CNN Saturday. "I hope that the speaker takes that to heart."

7:25 p.m. ET - @EWErickson: What I'm most interested in about Nevada tonight is whether Ron Paul comes in second or third.

7:22 p.m. ET - The economy was the most important issue on voter's minds in Nevada Tuesday, followed by the budget deficit, illegal immigration and abortion, according to CNN entrance polling. And the most important candidate quality? Forty-four percent said their ability to defeat President Barack Obama.

7:13 p.m. ET - There are 28 delegates at stake on Tuesday that will be awarded proportionally.

6:48 p.m. ET - @stevebruskCNN: So where to next? Gingrich goes to Colorado Monday, Santorum is in Minnesota and Colorado next two days, Paul returns to MN Monday.

6:45 p.m. ET - Paul, appearing at a campaign rally Arden Hill, Minnesota, said "It sounds like the revolution has already come to Minnesota," where caucuses will take place Tuesday.

6:35 p.m. ET - @David_Gergen: Surprised when Newt today called the social safety net "a spider web"? Why are these GOP candidates stumbling over poverty?

6:15 p.m. ET - Only registered Republicans may participate in the GOP caucuses. Caucus-goers cast ballots for their preferred presidential candidate after hearing optional speeches from candidate representatives.

6:13 p.m. ET - Caucuses met at various times throughout Nevada depending on the county. All but one caucus site scheduled to conclude by 6 p.m. ET. The final Nevada caucus meeting in the state begins at 10 p.m. ET (that’s the special caucus in Clark County to accommodate Orthodox Jews and Seventh-Day Adventists). Caucuses in the rest of the state begin as early as 10 a.m. ET and end as late as 6 p.m. ET, depending on the county.

6:18 p.m. ET - According to CNN entrance polling, 57% of Nevada caucus-goers decided who they would back before January and 20% decided in January.