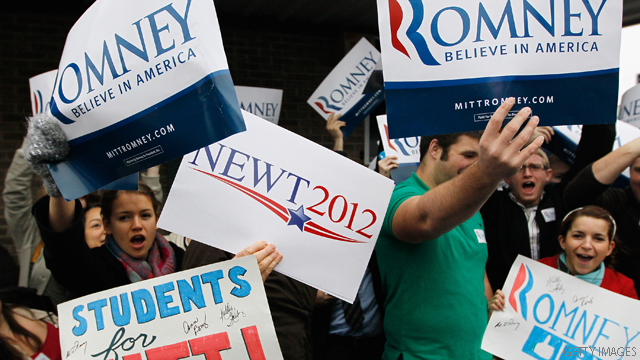 Las Vegas (CNN) - One of Mitt Romney's leading backers in Congress is publicly calling on Newt Gingrich to drop out of the presidential race.

Nevada Rep. Joe Heck, who has been closely allied with Romney since his 2008 presidential bid, said the results of Saturday's Nevada caucuses - likely a blowout win for Romney - should be a wake-up call for Gingrich.

"I hope he takes the message that it's time to withdraw gracefully and not continue to divide the party," Heck told reporters in Las Vegas, shortly before the first round of caucus results were announced.

While Romney's campaign and his network of supporters have voiced concerns about Gingrich's threat to remain in the race for the long haul, there has not yet been a chorus of Republican leaders publicly asking him to drop out.

Heck, though, said bluntly that it's time for Gingrich to leave the race.

"The message we heard at our caucus, and what I have heard from other people at other caucuses, was that while people stood up to talk about who their preferred candidate was, they also talked about the need come together and unite behind the nominee to increase our probabilities of success," Heck said. "I hope that the Speaker takes that to heart."

He was not as insistent, however, when asked if Ron Paul should also bow out for the good of the party.

Paul should quit when it becomes apparent that there is "enough critical mass in terms of delegates," he said, probably sometime after Super Tuesday.