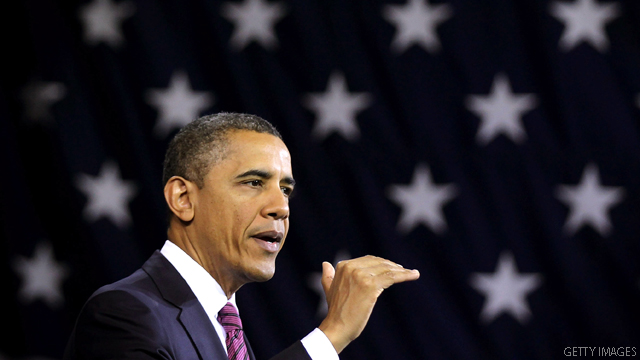 The ABC/Washington Post Poll indicated Obama is ahead of Mitt Romney, 51% to 45%, among registered voters. The new figure is the first time Obama cracked 50% against the former Massachusetts governor in the survey. He received 46% to Romney's 47% in mid-January.

It appears Obama was also aided by an increase in support among independent voters, who were split 48% for Obama and 47% for Romney. The former Massachusetts governor held a 12-point edge in January.

The new figures showed Romney's business background, which he often touts on the campaign trail, is a positive element of his candidacy. He held a narrow edge over Obama on who is best to handle the economy.

The president also bested Gingrich, 54% to 43%, among registered votes, although it was a smaller margin than the 15% by which Obama led the former House speaker in January.

In an interview on Sunday the president said he deserves a second term. The poll found 49% of registered voters agreed, while 49% said he does not deserve a second term.

But the president did not fare as well among independent voters, who will likely play a significant role in the 2012 elections.

Obama received a 47% approval rate among the key voting bloc and a 50% disapproval figure.

The poll questioned 1,000 adults between Wednesday and Saturday with a sampling error of plus or minus four percentage points.