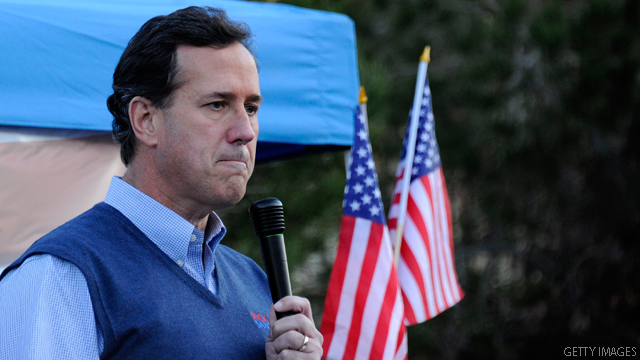 Former Gov. Tim Pawlenty of Minnesota, one of the states set to vote Tuesday, was dispatched by Team Romney to criticize the former Pennsylvania senator's legislative record and poke holes in his self described conservative platform.

"Votes and his behavior in Congress reflected that drift away from fiscal discipline," Pawlenty said on a conference call with reporters. "He has been party of the big spending establishment in Congress and in the influence peddling."

Santorum has defended his use of earmarks as a mechanism to funnel resources to his state, but Pawlenty said support for such spending and votes to increase the debt ceiling prove he is not a perfect conservative "by a long shot."

The up tic in attention on Santorum from Team Romney is evidence the campaign sees him as an increasingly formidable challenger heading into Tuesday's contests in Minnesota, Missouri and Colorado.

Pawlenty, who dropped his own bid for president in August before backing Romney, said the Minnesota caucuses constitute a more conservative voting bloc, with whom he predicted Santorum will do well. However, assertions that Santorum is the only real conservative candidate in the race "just isn't true," Pawlenty said.

His defense of Romney's record was met with a retort from Santorum, who said Romney previously supported earmarks and that the negative comments were "typical Romney."

"Here is a situation where someone is now doing well, rising in the polls and instead of Gov. Romney going out and talking about his plans and what he's going to do, he goes out and throws the kitchen sink, runs negative ads, sends out his surrogates to rip and tear," Santorum said in Rochester, Minnesota.

The back-and-forth followed a lengthy Santorum health care speech Monday that intertwined his own plans for health care reform with a scathing critique of the health care plan Romney signed into law in Massachusetts that resembles the current national law.

"There is now a concern by me as a candidate for president and hopefully to the people here in Minnesota that we would put someone up who is uniquely unqualified and I would argue disqualified from making the most important argument in this election – that we don't need government control of that one sixth of the economy of our country and that we need to repeal Obamacare," Santorum said during the speech.

Santorum spokesman Hogan Gidley continued to hit Romney over his state's health care law, saying it was Pawlenty who previously created the "Obamneycare" nickname when he was running for the White House.

"We're all looking for Gov. Romney to finally have firm conviction on something, but it's pretty telling that he picks Romneycare," Gidley said in a statement.