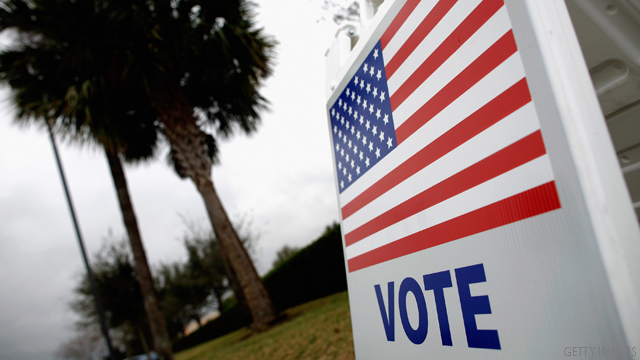 (CNN) - Seventy delegates were at stake in Tuesday's Republican presidential contests, the largest haul to date in the race for the White House. Mitt Romney, Newt Gingrich, Rick Santorum and Ron Paul vied for the delegates up for grabs in the Colorado and Minnesota caucuses. No delegates were are at stake in the non-binding Missouri primary.

Read below for reporting from our reporters and producers. Follow real-times results at CNNPolitics.com and on Twitter at #cnnelections. Read more here.

1:05 a.m. ET - @AriFleischer: There are no delegates won tonight; but there is a new winner. Just watch the boost the press gives Santo – for a day or two

12:20 p.m. ET - @rolandsmartin: What did I say Saturday night? Romney got several points less in Nevada than when he blew everyone away in 2008. Tonight... He is losing states, and in them, counties he won in 2008. GOP voters are not enthused with Romney as the candidate.

12:18 p.m. ET - @rolandsmartin: I also made clear that everyone needs to stop with the Romney juggernaut nonsense after Florida and Nevada. Tonight is Exhibit B

12:17 a.m. ET - @rolandsmartin: These election results are hilarious. I told everyone that Santorum & others should not drop out of the race. Tonight is Exhibit A

11:54 p.m. ET - @DanaBashCNN: Santorum told me he'll be competing everywhere. Says he has to keep winning to show he can be alt to Obama. Intv On CNN soon #cnnelections

11:48 p.m. ET - @streitfeldcnn: Glitter bomb @vplus: There was some sort of scuffle at the Romney event just now - we are about to replay the tape on the air #CNNelections

11:45 p.m. ET - @stevebruskCNN: Secret Service pulls Romney away from someone on rope line - person hustled out of room as Romney continues shaking hands

11:43 p.m. ET - @KevinBohnCNN: Feb. 7 not a great day for Romney. 4 yrs ago he suspended his campaign at CPAC speech. Tonite he loses at least two contests. #CNNElections

11:42 p.m. ET - Romney chronicled his father's rise to success, in spite of never having graduated from High School.

"There were a lot reasons my father could have given up or set his sights lower. But Dad always believed in America," Romney said of the late George Romney. "For my Dad, America was the land of opportunity, where the circumstances of birth are no barrier to achieving ones dreams. In Dad's America, small business and entrepreneurs were encouraged, and respected."

11:38 p.m. ET - @streitfeldcnn: Despite a capacious buffer zone, there is empty space at the back of Romney's Colo HQ. He opens speech w reminder he drew 2800 ppl yesty

11:34 p.m. ET - Speaking to supporters as his campaign headquarters in Denver, Romney said he's "pretty confident we'll come in number one or number two" in Colorado.

11:26 p.m. ET - @EWErickson: Romney aggressive attacking Santorum gives validity to Newt's whining about nastiness and makes Romney seem petty like Newt is portrayed. Suddenly Romney could be seen as nasty as your typical Romney supporter on twitter or at the Washington Post.

11:18 p.m. ET - @JohnKingCNN: Colorado counting in the IA and NV tradition! stuck at 11% for long time. But hearing technical issues near resolution. #CNNelections

11:10 p.m. ET - Paul told supporters at his campaign headquarters in Golden Valley, Minnesota that he expects the success of his campaign to continue. Next up? Maine, which holds its caucuses on February 11th.

11:09 p.m. ET - @PeterHambyCNN: open caucus good makes for a good night for Paul in Minnesota. Not so in Colorado, where it's closed to Rs only.

11:02 p.m. ET - @deirdrewalshcnn: Acknowledging the non-binding primary in MO, Santorum says "we're not done with you yet in Missouri" #CNNElections

10:59 p.m. ET - @stevebruskCNN: And in a not very veiled swipe at Romney, Santorum says he cares about the very rich "and the very poor"

He said Tuesday's results are a preview of the fall election.

10:53 p.m. ET - @alexcast: santorum speeches prove that it is easier to talk when you believe in something passionately

10:52 p.m. ET - @PrestonCNN: Long time Santorum strategist John Brabender tells me: The Show Me State showed us tonight that when Rick Santorum gets a 1-on1 shot at Mitt Romney, Rick Santorum wins in dramatic fashion.

10:50 p.m. ET - Santorum told his supporters that their votes were heard across the United States and "maybe in Massachusetts were heard particularly loud tonight." And his message to 1600 Pennsylvania Avenue? "You better start listening to the voice of the people," Santorum said.

10:48 p.m. ET - Santorum took the stage at his campaign headquarters in St. Charles, Missouri, saying "conservatism is alive and will in Missouri and Minnesota."

10:42 p.m. ET - @stevebruskCNN: Interesting points from @peterhambyCNN: Romney won Minnesota in '08, flew there morning after Florida, and did polling there

10:38 p.m. ET - @ErinBurnett: Election to date #Romney #superpac has outraised #Santorum Superpac 41 to 1. Will that change after tonight's victories? #cnnelections

10:37 p.m. ET - @David_Gergen: Do think there is justice in Santorum getting a second shot at the brass ring after he was denied a clear triumph in Iowa. #CNNElections

10:34 p.m. ET - @AriFleischer: Even tho no delegates awarded tonight, money will come in for Santorum tomorrow.

10:27 p.m. ET - @jimacostacnn: Romney had tentative plans to visit Minnesota between Nevada and tonight. But scrapped that and sent T-paw instead. Blamed sked issues.

10:19 p.m. ET - @DanaBashCNN: Its snowing here in the show me state. Good thing santorum is already in the building #cnnelections

10:15 p.m. ET - @DWSTweets: @arifleischer Just a reminder that Iowa Caucus awarded no delegates either. Plus, MO is bigger state, voted for McCain & IA went for Obama.

10:08 p.m. ET - "Red, White and Blue," the super PAC supporting Santorum's candidacy issued a press release Tuesday congratulating their candidate on his win in Missouri, where they ran ads.

"When Republicans are given the choice between a principled conservative and a calculated convert to conservatism, principles win big," the statement read.

9:38 p.m. ET - @mjaconicnn: Vote boards now showing @RickSantorum leading across the board: Colorado, Minnesota, Missouri but only 1%, 7% and 22% reporting #upset?

9:19 p.m. ET - A Missouri state official told @KevinBohnCNN: "After seeing the initial returns coming in, it's apparent turnout will be significantly lower than predicted."

9:18 p.m. ET - @DanaBashCNN: Big ballroom here for santorum in missouri but long way from full. Or close to it #cnnelections pic.twitter.com/3qx12ndX

9:12 p.m. ET - @David_Gergen: Upsets may well be unfolding with Santorum ahead in Minn and Missouri. Lots of votes to go. # cnnelections

9:11 p.m. ET - @JohnKingCNN: Impt to remember Missouri results mean NOTHING re delegates, but would be big moral victory for Santorum if he wins. #cnnelections

9:08 p.m ET - @jimspellmancnn: The caucusing has begun in colorado ! #CNNElections About a third are caucusing for the first time pic.twitter.com/ma879hDI

9:02 p.m. ET - @DanaBashCNN: Turnout low in missouri? State committeeman tells me he was 46th vote at precinct at 3p. In other times he would be 46th @ 8a #cnnelections

8:50 p.m. ET - @DanaBashCNN: Santorum 2 Texas 2morrow.Why? "that's where the money is" an adviser tells me. Says donors there want 2 give & want 2 meet him #cnnelections

8:31 p.m. ET - Addressing a caucus in Maple Grove, Minnesota, Paul detailed his personal and political background. He stressed his history as a proponent of the constitution, spending cuts and civil liberties and against foreign wars.

8:22 p.m. ET - @ShanTravisCNN reports Paul is planning to address caucus-goers in Maple Grove, Minnesota after local elected officials address the group and before voters break-off into sub-groups to discuss the 2012 Republican candidates.

8:02 p.m. ET - @jimacostacnn: Quiet night so far from Team Romney. No emails on sked, endorsements, or surrogate attacks on rivals in about five hours.

8:00 p.m. ET - @stevebruskCNN: Gingrich to Wolf Blitzer: "at the rate we're going you could have the first open convention since 1940"

7:55 p.m. ET - Gingrich reiterated his plan to be even with Romney among delegates by the Texas contest on April 6th. He said he spoke to Texas governor and former presidential candidate Rick Perry Tuesday and that the campaign is strong in the Lone Star State.

7:52 p.m. ET - Gingrich said he hasn't given up on winning the states Tuesday, but told @wolfblitzercnn he's looking forward to other early voting states, including Ohio, Arizona, Tennessee and Michigan.

7:24 p.m. ET - Bachmann said the Minnesota caucuses "literally could go to any of the four candidates."

And although she said she doesn't regret dropping her White House bid, she did say, "I miss the debates most of all."

7:21 p.m. ET - Former presidential candidate and Minnesota Rep. Michele Bachmann said she did not participate in her state's caucuses because she was doing her job in the House. She told @wolfblitzercnn she "would be if I could."

7:03 p.m. ET - @mjaconicnn: More delegates at stake tonight than any other night in the campaign so far #CNNelections

6:30 p.m. ET - @David_Gergen: What looked like sleepy night now has real drama: could Romney lose 2 of 3? Join us #cnnelections.

6:20 p.m. ET - @AriFleischer: It's an old style nite bcause there are no exit polls. Usually we have a good sense of how it's going. Tonite it's just results.

6:15 p.m. ET - When discussing his chances Tuesday, Paul told @JohnKingCNN "Well we're gonna win some delegates, whether we come in one or two or three, I don't know exactly that."

"But we feel positive about moving along and picking up more delegates. We'll have to wait and see," Paul added.

5:37 p.m. ET - @DanaBashCNN: This is where Rick santorum will be standing tonite. Ballroom way bigger than other elex night events #cnnelection pic.twitter.com/ObGJBw2D

4:47 p.m. ET - @KevinBohnCNN: Anecdotally there are reports of light turnout in Missouri for $7 mill non-binding primary; may not meet orig est of 23%. #CNNElection