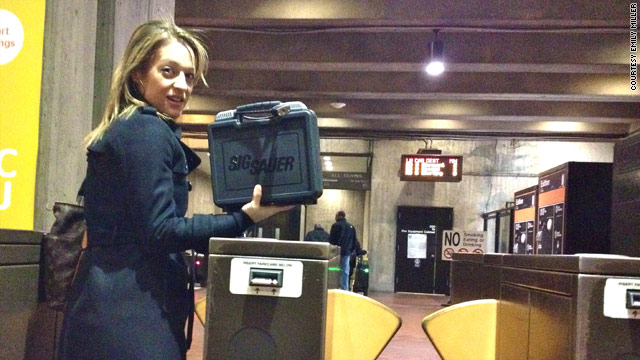 A loaded issue: Newspaper editor gets her gun

(CNN) – It has been her target for four months: legally own a gun in DC.

And today, Emily Miller, an opinion editor for the Washington Times who has chronicled her journey through what she sees as the Washington, DC's maze of firearms regulations, brought home her Sig Sauer P229 9mm handgun.

In the wake of a 2008 US Supreme Court decision striking down the district's three-decade old handgun ban, the city scrambled to create a system for firearm registration and tracking. In a series of posts to The Washington Times website, Miller makes a case for simplifying the process which is in place now nearly four years later – a process which she portrays as a labyrinth of sometimes redundant and consistently complex regulations and procedures.

Restrictive regulations and the associated costs keep otherwise law-abiding individuals from registering their guns in DC, she told CNN. "All these laws are doing is keeping people who want to abide by the law from getting one," Miller said.

The U.S. Supreme Court struck down the city's long-standing ban in a high profile 2008 case - District of Columbia v. Heller - but left room for some restrictions, such as a registration procedure. Individuals are allowed to own and store handguns, revolvers, rifles, and shotguns, according to the Metropolitan Police Department. The city will not register machine guns, sawed-off shotguns, and some semi-automatic weapons, and individuals are not allowed to carry a gun.

Miller said her journey to handgun ownership began as frightening and personal before it became an endeavor of opinion journalism.

"I was home during a home invasion and I had to spend the night in that house," Miller told CNN in telephone interview. "If I had a gun by the bed I would feel so much safer."

She has testified in a city review of gun regulations, as has an attorney representing The Brady Campaign to Prevent Gun Violence, a spokeswoman for the organization told CNN.

"One of the reasons we strongly support the District of Columbia's gun laws, is we think that anybody who wants to exercise the responsibility that is gun ownership should be primarily concerned with protecting the lives of innocent people," Caroline Brewer said. "There are obviously a number of different steps and the processes are there because they are trying to take the greatest care to make sure that the people who receive these guns are responsible."

A Wednesday afternoon call to the Metropolitan Police Department was not returned.

Miller brought her Sig Sauer home Wednesday aboard the city's mass transportation, the Metro, and posted photos of her experience to Twitter and her blog. Now that she has her gun, what next?

"Now that I've gotten it home I'm going to take a couple of days off," from navigating the world of firearms regulations, she said.