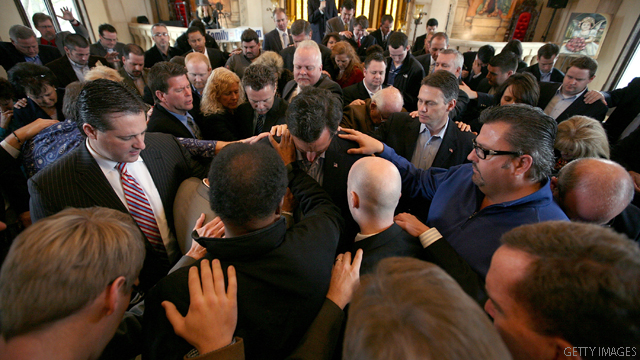 Due to several last-minute TV interviews added to his schedule on Wednesday morning, Santorum arrived at the chapel nearly an hour late, which shrunk the amount of time his campaign set aside for midday fundraisers in this wealthy, predominantly Republican state. The delay forced him to rush out after his address, skipping a planned visit with several hundred supporters who had gathered outside the chapel, unable to get in to the invite-only event.

Inside the chapel, Santorum made only a veiled reference to his GOP opponents, telling the pastors that the problems he sees in Washington D.C. are located at the root, and are "not issues of management" - a clear reference to Mitt Romney, who has consistently highlighted his experience as a manager to position himself as the candidate best-prepared to help steer the nation's economy.

"There's not a management problem in Washington, alright," Santorum said. "There's a more foundational problem there that goes to the basic concepts of who we are as a people. And those are deeply moral questions."

In his remarks, Santorum explored what those questions meant to him, discussing the death of his son Gabriel just hours after his birth and the health problems that have plagued his youngest daughter Bella, who was born with the genetic disorder trisomy 18. He also talked in depth about his faith journey, charting a path from the time he was first elected to Congress when faith "wasn't central" to his life, straight through to meeting his wife Karen and the growth of their faith together.

"The institution of marriage saved my life," Santorum said. "Without my wife Karen and the journey that we walked on together, I wouldn't even be near the state of Texas right now. This was a turning point in my life."

Santorum married his wife the same year he was first elected to Congress, and he described how the growth of their religious faith has shaped him into the candidate he is today, a candidate who sees no boundaries between faith and politics.

Contrasting this with what he called the "secular left," Santorum railed against the administration of President Barack Obama and its allies for "ostracizing" those who disagree with their secular ideology.

"The intolerance of the left, the intolerance of the secular ideology, it is a religion unto itself, it is just not a biblical based religion, and it is the most intolerant," Santorum said. "Just like we saw from the days of the atheists of the Soviet Union, it is completely intolerant of dissent. They fear dissent. Why? Because the dissent comes from folks who use reason, common sense, and divine revelation and they want no part of any of those things."

"They want their world view to be imposed without question, and if you question them, you're haters, you're bigots, and you should be as a result of that ostracized from the public square," he added.

The message of a war between believers and non-believers was well received in the small chapel, and many in the audience were brought to tears by Santorum's personal stories. Following the event, the chapel's pastor Richard Ellis called on the audience to pray for Santorum's candidacy. But rather than simply bowing their heads at their seats, Ellis directed Santorum to walk to the center of the small congregation and the crowd of pastors stood in concentric circles around him, arms touching, heads bowed, as they called on God to guide the candidate in his campaign for president.