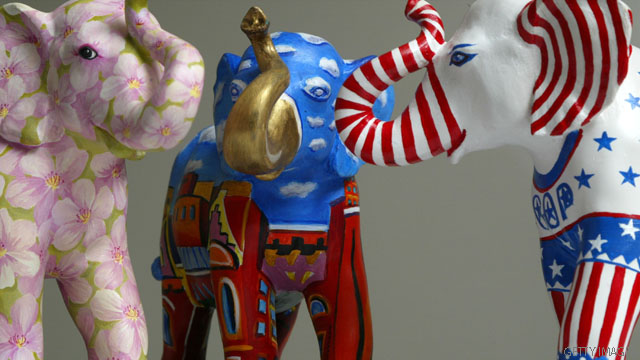 Mitt Romney dropped his bid for the 2008 Republican presidential nomination in his speech at the Conservative Political Action Conference. The former Massachusetts governor, at the time one of the conservative alternatives to eventual GOP nominee Sen. John McCain of Arizona, went on to win CPAC's much-watched presidential straw poll, the second of this three straight victories at the annual gathering of conservative leaders.

Fast forward back to present day: Romney, now the front-runner in his second bid for the nomination, is getting ready to once again speak at CPAC, but this time, just days after stinging losses in three contests.

This time around, Romney is whom some conservatives are still seeking an alternative to.

This is the 39th edition of what is considered the largest and most influential gathering of conservative leaders and activists from across the country. Romney, as well as former Sen. Rick Santorum of Pennsylvania and former House Speaker Newt Gingrich, will address the audience on Friday. The other major Republican presidential candidate, Rep. Ron Paul of Texas, is skipping the conference to campaign in Maine, which is holding its caucuses this week, but his son, Sen. Rand Paul of Kentucky, will speak at CPAC Thursday.

"Conservatives are the base of the movement and the right," Al Cardenas, the chairman of the American Conservative Union, the group that puts on CPAC, said Thursday on CNN's "Starting Point."

"A small handful of annual events have become a major center of gravity for conservatives. Of those, CPAC is perhaps the most high-profile and pivotal – especially in a presidential election year. There's much talk in the press about whether conservatives are fractured in their support for a particular issue or candidate – but conferences like CPAC can have a significant unifying effect," said Levi Russell, director of public affairs for Americans for Prosperity, a fiscally conservative political advocacy group that supports businesses and fights government regulations.

CPAC will close Saturday with the results of the much-watched GOP presidential straw poll and Palin's speech. Romney's three straight victories from 2007-2009 have been followed by a trifecta of wins by Paul.

Thanks to Santorum's victories Tuesday in the Colorado and Minnesota caucuses and in a non-binding primary in Missouri, the race for the GOP nomination appears unsettled, with front-runner Romney having a hard time locking down support from conservatives and tea party activists.

"It will be interesting. We haven't had a real contested presidential race here at CPAC in two decades," adds Cardenas.

And that's why all eyes will be on CPAC this weekend.

"If CPAC was important in the battle for the Republican nomination, that importance has only intensified since Tuesday's results, said Doug Heye, a GOP strategist and former communications director for the Republican National Committee. "This is the best chance for the four remaining candidates to make the case to a wide swath of conservative voters - and activists - why they are the best choice to defeat Barack Obama."