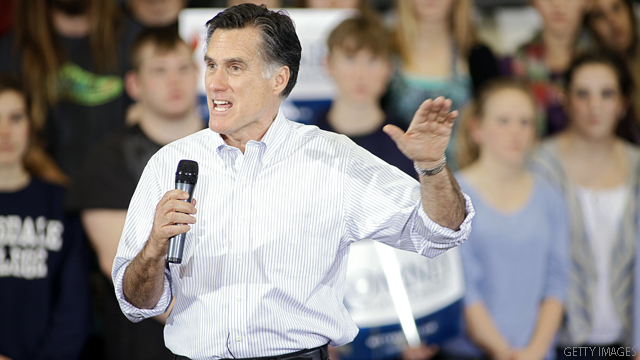 (CNN) – Team Mitt Romney continued to take on rival Rick Santorum over his fiscal record while serving in the Senate, following his trifecta of wins Tuesday.

The campaign is scheduled to hold a conference call Thursday and issued a barrage of campaign statements criticizing the former Pennsylvania senator for his past support of earmarks and "reckless spending."

"The Washington politicians who got us into this mess can't possibly lead us out," Gitcho said in a statement.

The campaign offensive follows amped up rhetoric from the candidate Wednesday, one day after Santorum's wins in Colorado, Minnesota and Missouri.

While speaking with reporters, the former Massachusetts governor said Santorum and GOP contender Newt Gingrich "acted like Democrats" during their tenures in Congress.

"Frankly Rick Santorum and Newt Gingrich were a big part of the we that spent too much, borrowed too much and earmarked too much," Romney said in Atlanta. "Under Newt Gingrich earmarks doubled. Rick Santorum was a major earmarker and continues to defend earmarks. Under Rick Santorum, he voted to raise the debt ceiling, I believe five different times, to a tune of about an additional $3.5 trillion."

Former Republican presidential nominee and Sen. John McCain was the latest Romney surrogate to receive the memo Thursday. McCain, a long advocate against earmarks, questioned the validity of calling Santorum or Gingrich fiscal conservatives during an appearance on CNN's "Starting Point."

"For Newt Gingrich or Rick Santorum to call themselves fiscal conservatives is simply defiance of the record," McCain told CNN's Soledad O'Brien. "They were earmarkers, pork barrelers, encouraged the K-Street project, which led to corruption."

Santorum has defended his use of earmarks as a vehicle to funnel funds back to his constituents, but has said he now believes the practice should end.

"When you go to Congress, you make sure that when taxes go from your state to Washington, D.C., you fight to make sure you get your fair share back," Santorum told CNN's "John King, USA" Tuesday. "I also said that when earmarks got abusive, that we should end them."

And at a campaign rally Wednesday night Santorum jabbed Romney's record as a former business executive.

"If this race is about how to better manage Washington, D.C. with someone who's a CEO and can manage the affairs and create a better platform for government, then we will not lose this election, but even if we win this election we will eventually lose this country," Santorum said in Plano, Texas.