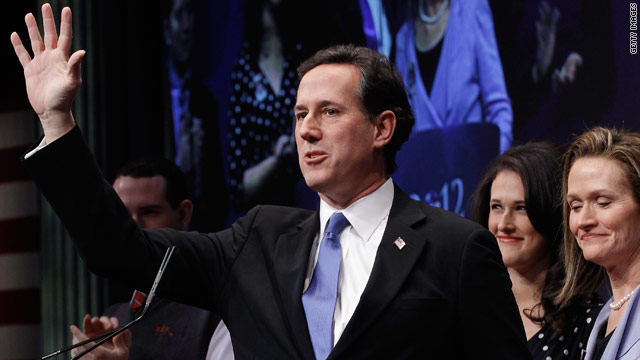 (CNN) - It's the state where Mitt Romney grew up and where his father served as governor in the 1960's, but a new poll in Michigan indicates that Rick Santorum is on top in the race for the Republican presidential nomination.

According to an American Research Group survey released Monday, 33% of likely Michigan GOP primary voters say they are backing Santorum, the former senator from Pennsylvania, with 27% supporting Romney, the former Massachusetts governor. Twenty-one percent are backing former House Speaker Newt Gingrich, 12% are supporting Rep. Ron Paul of Texas and 6% are undecided. Santorum's advantage is technically within the poll's sampling error.

Romney won the 2008 Republican contest in Michigan, edging out eventual GOP nominee Sen. John McCain of Arizona by nine points. But four years later, the Santorum campaign feels they can be competitive in Michigan, as well as Ohio, which votes on Super Tuesday on March 6. Both states are considered part of the Rust Belt, with larger working class populations and strong Catholic communities, which may favor Santorum over Romney.

According to the poll, 37% of self-described supporters of the tea party movement say they support Santorum, with 29% backing Gingrich, 17% supporting Romney and 11% backing Paul. Among people who are not backers of the tea party, or who are unsure about the movement, 35% back Romney, with Santorum at 30%, Gingrich at 14% and Paul at 13%.

The survey indicates that Santorum edges out Romney 33%-28% among male voters, with Romney topping Santorum 39%-33% among female voters.

The American Research Group poll was conducted February 11-12, with 600 likely Michigan GOP primary voters questioned by telephone. The survey's sampling error is plus or minus four percentage points.