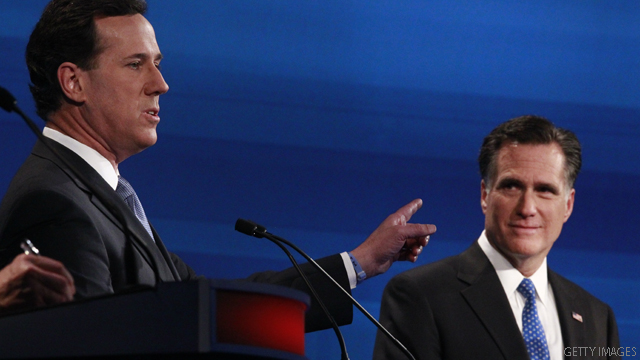 Polls: All tied up between Romney and Santorum

Washington (CNN) - The race for the Republican presidential nomination appears to be all knotted up between former Massachusetts Gov. Mitt Romney and former Sen. Rick Santorum of Pennsylvania, according to three new national surveys.

A CBS News/New York Times poll released Tuesday morning indicates that 30% of likely Republican primary and caucus voters say they are backing Santorum for their party's nomination, with Romney at 27%, Rep. Ron Paul of Texas at 12% and former House Speaker Newt Gingrich at 10%. Santorum's three-point advantage over Romney is within the survey's sampling error.

According to a Pew Research Center Poll that came out Monday afternoon, Santorum's at 30% nationally among Republicans and independent voters who lean towards the GOP, with Romney at 28%, Gingrich at 17% and Paul at 12%. Santorum's two-point margin over Romney is well within the survey's sampling error.

And the latest edition of the Gallup Daily Tracking poll, released Monday afternoon, indicates that 32% of registered Republicans say they are backing Romney for their party's nomination, with Santorum at 30%, former Gingrich at 16% and Paul at 8%. Romney's two-point margin over Santorum is within the survey's sampling error.

All three surveys were conducted entirely after Santorum's victories over Romney, Gingrich and Paul last Tuesday in caucuses in Colorado and Minnesota and a non-binding primary in Missouri. Santorum's sweep of the February 7 contests sparked a surge for the one-time long shot candidate in national and state polling.

Two of the surveys indicate that Santorum's jump in the polls is largely fueled by increased support from self-described conservatives, evangelical Christians and supporters of the tea party movement. The CBS/New York Times poll indicates that Santorum is backed by nearly four in 10 voters from each of these groups. Their survey last month indicated that no candidate was the clear favorite among these groups.

There are similar findings in the Pew survey, where Santorum has double digit leads over Romney among self-described tea party movement supporters and among white evangelical voters.

One constant in this race for the GOP nomination is fluidity. And the CBS/New York Times poll highlights that uncertainty among voters. A majority of those who backed a candidate said they could still change their minds. That's down from nearly three-quarters last month, but still more than high enough to shake things up.

"The primary wins have given Santorum wind at his back, which is important, but he'll need the infrastructure to build a sail to capture that wind if he's to be successful in future states," said GOP strategist Doug Heye, a former communications director for the Republican National Committee.

Romney edged out Santorum Saturday in a non-binding straw poll at the Conservative Political Action Conference, and topped Paul by less than 200 votes in the Maine caucuses, which were announced later that day. Arizona and Michigan are next up in the primary and caucus calendar. Both states hold primaries on February 28.

According to the Pew poll, President Barack Obama leads Romney 52% to 44% in a hypothetical general election matchup, with Obama topping Santorum 53% to 43% and beating Gingrich 57% to 39%.

The CBS News/New York Times poll was conducted between February 8 and February 13, with 331 Republican primary or caucus voters nationwide questioned by telephone. The survey's sampling error is plus or minus five percentage points.

The Pew Poll was conducted between February 8 and February 12, with 1,172 registered voters nationwide, including 552 Republican or independents who lean towards the GOP, questioned by telephone. The survey's sampling error for registered voters is plus or minus 3.5 percentage points, with a sampling error of plus or minus five percentage points for Republican nomination questions.

The Gallup Daily Tracking poll was conducted between February 8 and February 12, with 1,000 registered Republicans questioned by telephone. The survey's sampling error is plus or minus three percentage points.