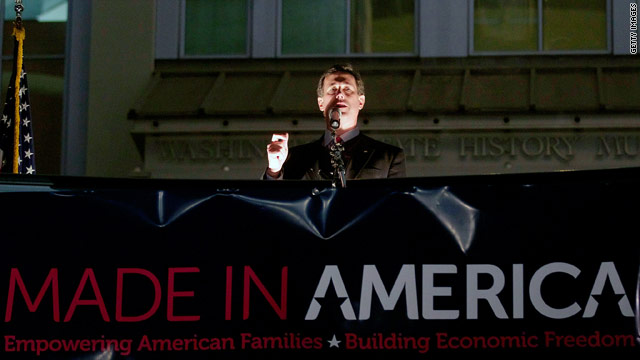 Santorum goes up with ads in Michigan

The campaign confirms to CNN that the spots, both positive in nature, will run statewide starting Tuesday. The move comes one day after a new poll indicated that the former senator from Pennsylvania was surging in the state, and as an independent super PAC that supports former Massachusetts Gov. Mitt Romney announced that it was buying $640,000 in ad time in the state. Restore Our Future has already spent a quarter of a million dollars to run TV commercials in Michigan. And the Romney campaign announced Tuesday they were going up with a new spot that touts the candidate's Michigan roots.

Arizona and Michigan are next up in the primary and caucus calendar, with both states holding contests in two weeks, on February 28. While Arizona's 29 delegates are winner take all, the 30 delegates at stake in Michigan will be divided proportionally.

Both Santorum and Romney will campaign in Michigan later this week.

One of the ads distinguishes Santorum from Romney and the other GOP candidates, asking, "Who has the best chance to beat Obama?" The spot argues his positions on social issues, corruption, and foreign policy are unmatched.

Another highlights praise for Santorum from influential conservatives.

According to an American Research Group survey released Monday, 33% of people likely to vote in Michigan's GOP presidential primary said they are supporting the one-time long shot candidate, with 27% backing Romney, 21% supporting former House Speaker Newt Gingrich and 12% backing Rep. Ron Paul of Texas. The survey was conducted entirely after Santorum's victories over Romney, Gingrich and Paul last Tuesday in caucuses in Colorado and Minnesota and a non-binding primary in Missouri. Santorum's sweep of the February 7 contests sparked his surge in national and state polling.

The Santorum campaign is concentrating more of its firepower on Michigan rather than Arizona. The campaign feels they can be competitive in Michigan, as well as Ohio, which votes on Super Tuesday on March 6. Both states are considered part of the Rust Belt, with larger working class populations and strong Catholic communities, which may favor Santorum over Romney, who was born in Michigan and whose father served as governor of the state in the 1960's.