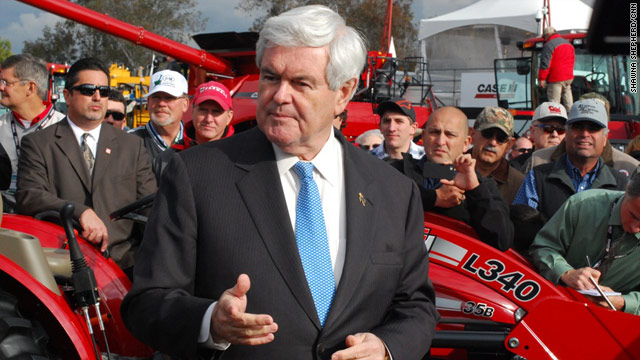 Gingrich was asked by a reporter to comment on Santorum, who last week expressed concerns about women serving in military combat roles, telling CNN last week that could lead to a “compromising situation where people naturally may do things that may not be in the interest of the mission because of other types of emotions that are involved.”

Although Santorum later said he was referring to both male and female emotions, Gingrich added to chorus of criticism during a campaign stop in California’s Central Valley Tuesday.

“The fact is, if you're serving in uniform in Iraq or Afghanistan, or any place in modern warfare, you are in combat. Whatever your technical assignment, whether you’re a truck driver or you’re working with logistics or a military police person, you’re in combat,” Gingrich said after touring the World Ag Expo. “And I think that Rick completely misunderstands the nature of modern warfare by his comments.”

Gingrich is lagging behind the former Pennsylvania senator after a slate of victories have Santorum well-positioned to become the conservative alternative to former Massachusetts Gov. Mitt Romney.

The former House speaker, who is on a three-day fund-raising swing in California, has said he is committed to staying in the race, despite skeptics who are counting him out.

"Well they did twice before, and both times I came back ahead in the polls," Gingrich said Tuesday.