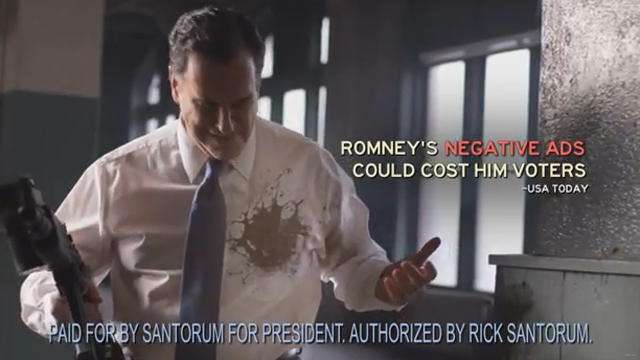 Washington (CNN) – The political back and forth between Mitt Romney and Rick Santorum heated up Wednesday with new ads in the next states to vote in the Republican presidential primary.

Santorum's campaign took a comedic turn in a new spot literally taking aim at Romney's record, including the health care legislation passed in Massachusetts. The commercial airing in Michigan uses an actor wearing a tie to portray Romney shooting mud at a cut out of Santorum, but missing his target.

"This time Romney's firing his mud at Rick Santorum … Romney's trying to hide from his big government 'Romneycare,'" the narrator says.

"In the end Mitt Romney's ugly attacks are going to backfire," the ad continues before mud splatters over the faux-Romney.

Responding to the ad with a chuckle on Fox News Wednesday, Romney said "that's the nature of politics, which is that you always accuse the other guy of what you're doing yourself."

The former Massachusetts governor said his campaign has yet to run negative ads against Santorum, who he said went negative in South Carolina and whose PAC did the same in Missouri. Santorum is also up with biography-touting spots in early voting states.

Although Romney's campaign has run positive spots, especially in his native Michigan where voters head to the polls on February 28, the super PAC supporting his candidacy has not been so kind.

Restore Our Future released a spot in Michigan as well as Arizona, which also votes on February 28, and Ohio, where ballots will be cast on March 6 that characterizes Santorum, the former Pennsylvania senator, as a "big spender Washington insider."

The new commercial is consistent with Team Romney's line of criticism that Santorum supported increases to the debt ceiling and pork barrel spending while serving in the Senate.

"Santorum voted to raise the debt limit five times and for billions in wasteful projects," the ad's narrator says. "In a single session Santorum co-sponsored 51 bills to increase spending and zero to cut spending."

The uptick in TV spending comes as Santorum has experienced a surge following wins in Missouri, Mississippi and Colorado. Recent polling shows Santorum is on top of Romney, but within the sampling error, in Michigan and Ohio polling. The two candidates will next meet on stage at a presidential debate co-sponsored by CNN in Arizona on February 22.