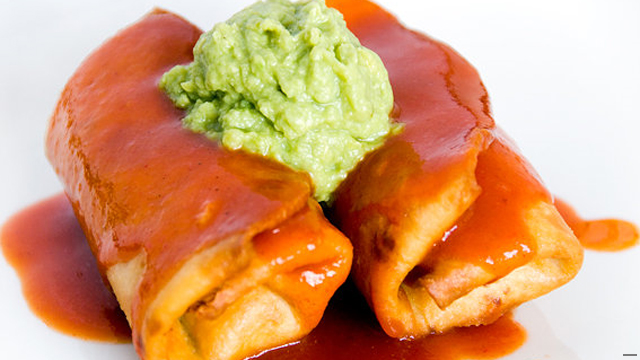 "Line of the day from WAPO's Dana Milbank: "The chimichanga? It may be the only thing Republicans have left to offer Latinos."

Milbank ended his Wednesday column that analyzed the Republican Party's treatment of the Latino voting bloc with the line. He borrowed the reference from Sen. John McCain, who he quoted earlier in the story.

"Sen. John McCain (R-Ariz.) spoke about the wonders of his state. 'The lettuce in your salad this month almost certainly came from Arizona,' McCain said. 'It's also believed that the chimichanga has its origin in Arizona,'" the piece read.

But Republicans quickly turned up the heat on the Messina tweet, arguing it was insensitive.

"The fact that the campaign manager of President Obama's reelection campaign thinks it's appropriate to disseminate insulting jokes about the Hispanic community is a perfect example of the kind of empty rhetoric that characterizes this White House's so-called outreach to Latinos," Sevilla wrote in a statement. "We demand that Mr. Messina immediately apologize and we ask that President Obama disavow his campaign manager's ridiculous statement."

Alexandra Franceschi, who handles Latino press for the RNC, said the tweet is proof Messina "doesn't understand the diversity of the Hispanic community."

"Hispanics deserve an apology for his inflammatory comment," Franceschi tweeted.

In response, Messina sent another tweet, in his defense: "Tweeting someone else's words caused a stir, but the GOP is on the wrong side of ever Hispanic voter priority: http://t.co/k3TtVGiO

But that reaction didn't quite satisfy the critics, @RNCLatinos among them.

"Someone else? YOU called it line of the day … MT @Messina2012: Tweeting someone else's words caused a stir…," read a tweet from the organization.