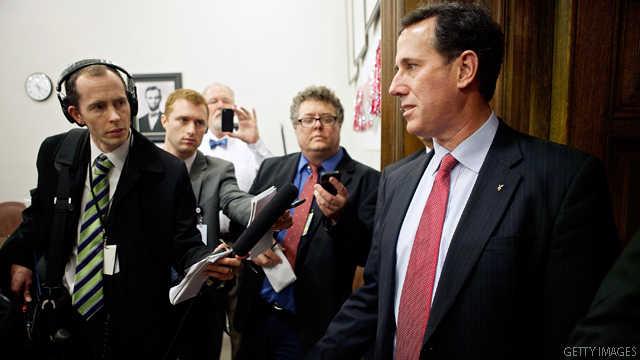 (CNN) - Do you need more evidence of the Santorum "surge" in state and national polling?

If so, then check out a new survey in Ohio released Wednesday morning by Quinnipiac University.

According to the poll, the former senator from Pennsylvania and one-time long shot for the GOP presidential nomination has soared to the top in Ohio, an important Super Tuesday state. Thirty-six percent of people likely to vote in the state's March 6 Republican primary say they support Santorum, with 29% backing former Massachusetts Gov. Mitt Romney, 20% supporting former House Speaker Newt Gingrich and 9% backing Rep. Ron Paul of Texas.

The survey was conducted nearly entirely after Santorum's victories over Romney, Gingrich and Paul last Tuesday in caucuses in Colorado and Minnesota and a non-binding primary in Missouri. Santorum's sweep of the February 7 contests sparked his surge in national and state polling, and cemented the perception that Romney was having a hard time locking down support of core conservatives.

"Sen. Rick Santorum has zoomed to the front of the line among likely voters in Ohio's March 6 Republican presidential primary," said Peter A. Brown, assistant director of the Quinnipiac University Polling Institute. "He appears to be riding the momentum from his victories last week in Minnesota, Colorado and Missouri."

Ohio is also a crucial battleground state in the general election, and the poll looks ahead to November. In a hypothetical matchup, President Barack Obama has a 46% to 44% margin over Romney, which is within the survey's sampling error. The president tops Santorum 47% to 41% and beats Gingrich 50% to 38%.

The poll indicates that picking Republican Sen. Rob Portman of Ohio, a Romney backer, as Romney's running mate would not help the GOP, with the Democratic ticket topping the Republican ticket 47% to 43%.

Ohio voters are split on whether Obama deserves a second term in the White House, and are also divided on the job he's doing as president. Forty-seven percent give him a thumbs up on his performance, with 48% saying they disapprove of how he's handling his duties. The 47% approval rating is Obama's highest rating in Quinnipiac polling in Ohio over the past year.

Ohio also has an important Senate contest in November, with Democratic incumbent Sen. Sherrod Brown battling for re-election. According to the poll, Brown leads Republican Josh Mandel, the Ohio state treasurer, 48% to 35%. The survey indicates that Brown has a 47% to 34% approval rating, and by a 46% to 34% margin, voters say he deserves a second term in the Senate.

The Quinnipiac University poll was conducted February 7 through February 12, with 1,421 registered voters in Ohio, including 553 likely GOP primary voters, questioned by telephone. The survey's overall sampling error is plus or minus 2.6 percentage points, with a sampling error of plus or minus 4.2 percentage points for questions only to likely Republican primary voters.