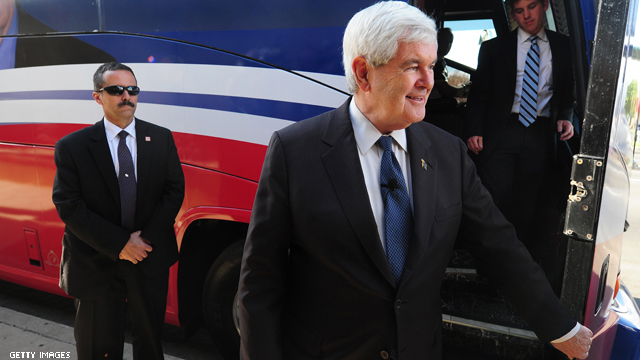 "Our goal is to raise $2 million out of California since the start of the campaign. I believe we're going to exceed that goal after this trip," said Gingrich's California Finance Chairman Eric Beach, who joined the campaign in December.

Beach was with Gingrich at La Gondola Restaurant in Beverly Hills where the candidate spoke at a luncheon with about 50 Jewish Republicans Thursday.

The campaign did not reveal how much they raised from this week's California fundraising blitz, but since last May, officials said Golden State residents have donated as much as $2 million to the former House speaker.

Presidential campaigns are not required to report the latest fundraising figures until the first quarter filing deadline on April 15. Until then, reporters must rely on anecdotal information from the campaigns.

Based on the campaign's FEC report and information provided by Beach, Team Gingrich has received at least $1 million in donations from Californians since January 1.

There have been nine early nominating contests since then, including Gingrich's South Carolina victory on January 21 that resulted in a nationwide fundraising boom for the campaign.

Gingrich's four-day visit to California included a handful of campaign events, but the visit was primed for eight closed press fundraisers in the Los Angeles and San Francisco areas, as well as San Diego and the Central Valley.

"Historically we've been the ATM for the rest of the nation," said Schroeder, who worked for former Massachusetts Gov. Mitt Romney when he ran for president in 2008.

If there's a drawn-out nomination fight California's June 5 primary, the state could become a critical win for Republican candidates hoping to capture the 172 delegates, a large majority of which are distributed proportionally.

After speaking at an event geared toward the Asian American community in Los Angeles, Gingrich repeated a metaphor for the state of the race.