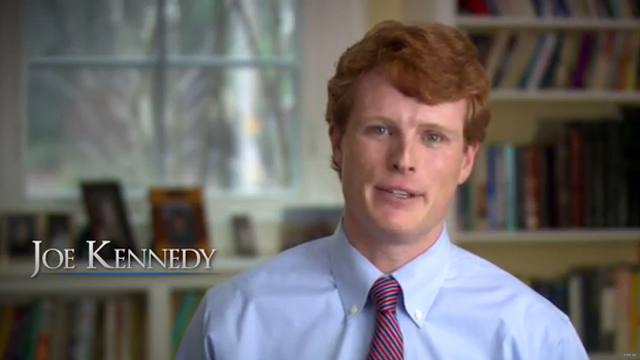 Kennedy, son of former Rep. Joseph P. Kennedy II, used a video on his campaign website to lay out his platform, detail his credentials and play up his last name, ahead of the Democratic primary in the state's 4th Congressional district.

"My family has had the great privilege of serving Massachusetts before. They taught me that public service is an honor given in trust and that trust must be earned each and every day," Kennedy said in the over two minute video. "That is exactly what I intend to do."

Kennedy, the grandson of former senator and U.S. Attorney General Robert Kennedy and grandnephew of former President John F. Kennedy, served in the Peace Corps after college before attending Harvard Law School and working as a prosecutor and assistant district attorney in Massachusetts. The 31-year-old stepped down from his DA post in early January when he announced plans to explore a run.

Frank, a high-ranking member of House Financial Services Committee, represented the heavily Democratic district for 16 terms. In a nod to the prominent representative, Kennedy said "he leaves very big shoes to fill."

"You can always count on me to fight for small businesses, seniors, veterans and for you to make sure you get the constituent service you've come to expect," he said.

The political family held at least one seat in Congress for 64 years, until Kennedy's second cousin Patrick Kennedy decided against a reelection bid for his Rhode Island congressional seat in 2010.