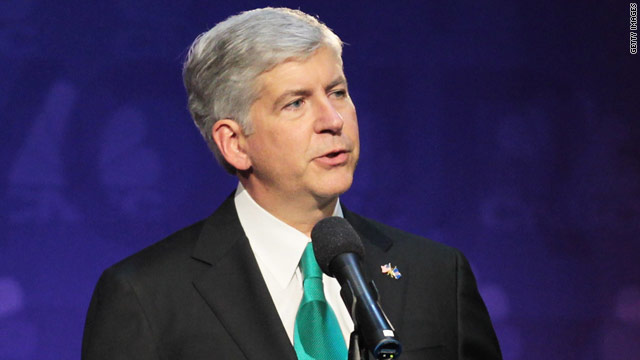 Grand Rapids, Michigan (CNN) - Michigan Gov. Rick Snyder endorsed Mitt Romney in an op-ed Thursday and will appear with the former Massachusetts governor later in the day, a GOP source confirmed to CNN.

In the Detroit News piece Snyder praised Romney's business credentials and actions as governor while emphasizing his roots in the Wolverine State ahead of the state's primary on February 28.

"Our country has never elected a president born and raised in Michigan. Mitt Romney was born in Detroit. His father served with distinction as governor," Snyder wrote. "Before that, he was president of American Motors. Mitt grew up with the prospects of the auto industry and of Michigan discussed around the dinner table."

The governor will announce his support in person in Farmington Hills, Michigan, at a meeting of the area chamber of commerce, as CNN reported Wednesday night.

Snyder's endorsement is a timely pickup for Romney, who is now battling a surging rival in former Sen. Rick Santorum in a state where Romney has deep ties and has long been favored to win.

Romney threw his support behind Snyder during his Michigan gubernatorial bid in August 2010.