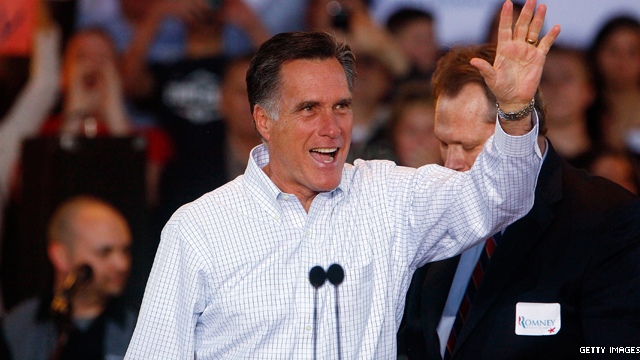 Beachwood, Ohio (CNN) - On Thursday Mitt Romney told a Cleveland-area audience a "true story" about a prank he said he had never publicly admitted to pulling.

The story involved a wedding, a woman Romney had "once spent time with," a pair of men's rented patent leather shoes, and a bottle of "shocking pink nail polish."

Here is the story he told at the Cuyahoga County Lincoln Day Dinner:

"You had some very beautiful young women here that I used to come try and date. I have to tell you a true story and I probably ought to just apologize for it right now. I don't think I've ever told this story in public.

“And it happened not far - you know where Elyria, Ohio is? Well, there was a young lady there who I once spent some time with, and she decided to marry a fellow. And my wife - my girlfriend then - was invited to be one of the bridesmaids.

“So I came to the wedding and it was a perfect wedding. They had little bottles of shocking pink nail polish so that everybody, all the brides had the same nail polish. And I came, and thought the wedding was a little too perfect.

“So I happened to go in the room where the groomsmen and the groom were. And I found the groom's shoes, the patent leather shoes that he had rented, and I took some of that shocking pink nail polish and I wrote something on the bottom of his shoes.

“And we went to the wedding and the minister gave a beautiful service and then he said let us pray and the couple knelt down. Now I hadn't calculated that everyone in the audience would put their head down in prayer so they couldn't see what I had written on his shoes.

“But slowly but surely people ahead of us began to shake a little bit and point up at the shoes and in bright pink letters it said H-E-L-P on the bottom of his shoes.

"I haven't seen a crowd rock like this in Ohio since then and I want to thank you for that wonderful welcome."