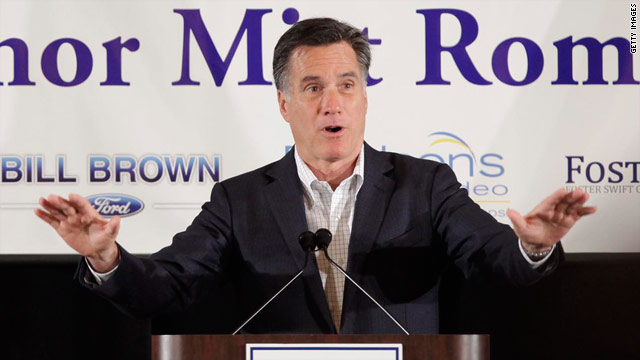 "I love American cars, and long may they rule the world, let me tell you. I want them to do well," Romney said at a chamber of commerce meeting in Farmington Hills, Michigan, later adding of the industry: "I'm delighted it's profitable."

But as his opponents have repeatedly pointed out, Romney opposed a federal bailout largely credited with pulling the struggling industry out of collapse.

In his speech to a friendly audience of more than 400 people, Romney did not mention his opposition to the bailout. Instead, he repeated an assertion that he had recommended the path taken months later by the Obama administration.

"I love the auto industry. I want to see it thrive and grow," Romney told the audience. "I'm glad it went through a managed bankruptcy process, which I recommended from the very beginning to shed unnecessary costs and get its footing again."

Romney has said he would have solicited private financing to inject capital into Detroit auto manufacturers.

In an unspoken reminder of the uneasy politics of his stance - a highly-charged position in Michigan ahead of the state's February 28 primary - on Thursday Romney accepted the endorsement of state Gov. Rick Snyder, who has said the bailout was effective in helping turn around GM and Chrysler.

Neither man made mention of their difference in opinion.

"We have the right man here to help lead our country, but there's a special bonus. He was born and raised a Michigander," Snyder said of Romney. "He understands our state. He's one of us."