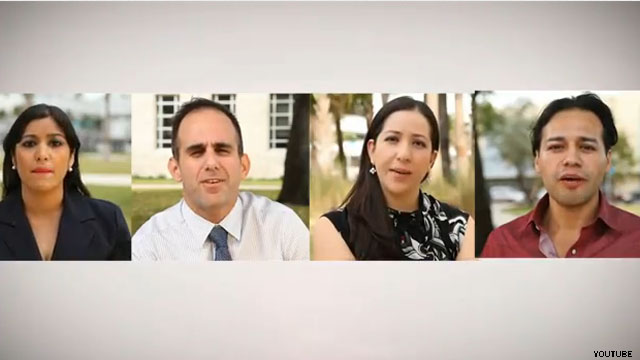 The 30-second spot, "Latinos with Newt," features four Hispanic supporters detailing why they want to see Gingrich in the White House.

"We owe Barack Obama nothing. Many of our people have lost their jobs. Others have lost their homes," one supporter said in the ad, as an image of Hispanic workers sitting idly on a curb appears on screen.

While Gingrich has struggled to recapture the short-lived momentum after his South Carolina primary victory in January, the campaign has said it expects to do well in Southern states, including Arizona.

A recent survey, however, showed Gingrich in third place in the state with 15% of likely Republican primary voters backing the candidate. According to the American Research Group poll, Romney came in first with 38% and Santorum in second at 31%.

"We need Newt Gingrich," another supporter said in the largely-positive ad. "He knows, understands us and shares our conservative values."

The campaign touts Gingrich's ties to the Latino community, including two books he published in Spanish and a National Hispanic Steering Committee with "top Latino leaders" from various states.

Gingrich also aimed for Latino support in Florida last month, releasing a Spanish-language radio ad before the state's January 31 primary. The campaign quickly stopped airing the ad, however, after the spot stirred controversy over attacking Romney as "anti-immigrant."

"Newt 2012 looks to win over the Latino vote in Arizona. This new ad is just one step to gaining their support. Unlike most campaigns, Newt Gingrich does not treat Latinos as a political convenience," spokesman R.C. Hammond said in a statement Friday.