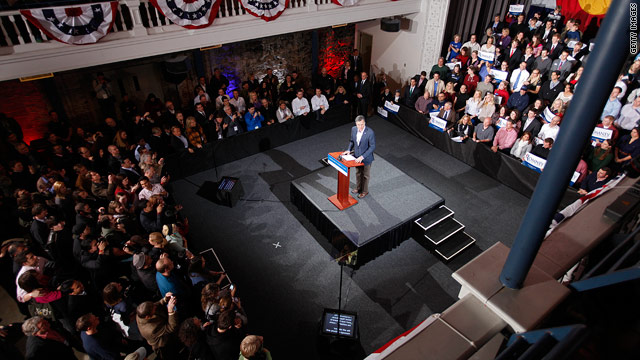 Washington (CNN) - The super PAC supporting Mitt Romney, Restore Our Future, announced it has bought almost $6 million in new ad time signaling a major escalation in campaign spending. The group is spending almost $2 million this week on ads in eight states and on national cable.

With the ad wars intensifying in Michigan, whose Feb. 28th primary is shaping up to be a major battle, the super PAC has bought an additional $876,000 for commercials there beginning next Tuesday on top of the $640,000 it said it is spending this week in the state.

Right now the group is airing in the state an ad attacking Rick Santorum as a "Washington Insider" pointing out his votes while in the U.S. Senate to raise the debt ceiling and increase spending. The group will not comment on what ads it will air as part of this future buy.

For its part, the Romney campaign has bought $1.33 million in Michigan ads according to a Republican media consultant. So far it is running a positive ad touting Romney's ties to the state pointing out his father was Governor, how he grew up there and emphasizing his affection to the car industry.

Romney and his allies are outspending Rick Santorum and his backers by about a 3-1 margin in Michigan.

According to the GOP media consultant, Santorum is up with $416,000 in ads which are a combination of positive ones showcasing Santorum as well as a commercial painting the former Pennsylvania Senator as the victim of vicious attacks.

Also helping Santorum in the media wars is the super PAC backing him, the Red, White and Blue Fund, which Thursday started airing $663,000 of spots through next Tuesday. It is airing a positive ad saying Santorum a "principled candidate," "a father, husband, champion of life" and "a proven conservative."

While Michigan is getting the lion's share of attention because Santorum is leading the polls in the state and he is making a major effort there, the Romney super PAC is not ignoring Arizona, which also votes on Feb. 28th. It has bought an additional $356,000 worth of commercials and is airing the anti-Santorum spot there as well. Currently Romney is leading there. Santorum's campaign has said it was planning on running ads there but so far his super PAC has not said it will.

Showcasing its financial muscle, the pro-Romney super PAC has also gone in with $3.92 million in additional commercials in four of the key states voting on March 6th, Super Tuesday: Ohio ($1.6 million); Georgia ($956,000); Tennessee ($915,000) and Oklahoma ($449,000). This week the group said in those four states it is spending over $500,000 for ad time, and it is showing a spot comparing Romney as someone who created thousands of jobs and who rescued the Salt Lake City Olympics to Santorum who it called "the ultimate Washington insider" and who voted to for billions in Washington waste.

The pro Santorum super PAC is expected to make an announcement early next week about commercial buys in Super Tuesday states, according to a source with knowledge of its plans. The source would not speak on the record because the group has refused to speak about its future plans.