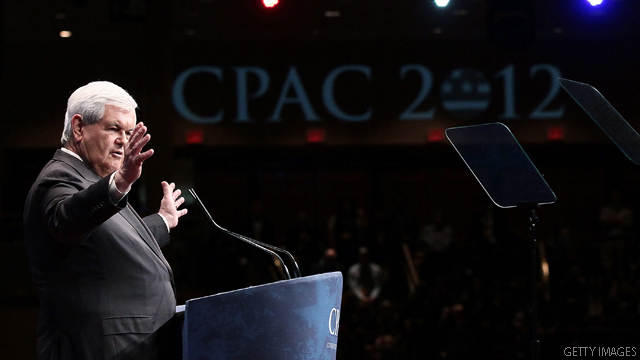 Washington (CNN) - In a move that could again dramatically shake up the Republican primary race, billionaire and major Republican donor Sheldon Adelson is expected to donate an additional $10 million to the super PAC supporting Newt Gingrich, Winning Our Future, a source with knowledge of the donation told CNN.

That contribution is expected soon, before the end of the month, the source said. The timing is important because Gingirch, whose campaign has been lagging, is hoping to do well in several of the upcoming Super Tuesday states that vote on March 6 to boost his effort. His allies will need that money to be in a position to help. Because ten states go to the polls on that one day, money is key in order to do well.

Such a large gift will give Winning Our Future a major financial shot in the arm and will help it narrow the financial disparity it has with the super PACs supporting Mitt Romney and Rick Santorum. Both of those groups are up with major TV ad buys while Winning Our Future is up with several radio ad campaigns.

Adelson, a Nevada casino mogul, and his extended family have already given $11 million to that PAC.

A spokesman for Adelson refused to comment on whether he will give more money.

There had been much speculation over whether Adelson would contribute more to aid Gingrich after he failed to win the Florida primary or do well in subsequent contests. Adelson and Gingrich's friendship goes back to the days when he was House speaker, and both share a strong commitment to Israel.

Some Republicans urged Adelson not to donate more to the super PAC to avoid lengthening the Republican nomination battle.

One motivation for Adelson, according to a second source with knowledge of his thinking, is that he does not want to see Santorum capture the nomination.

Any future Adelson contributions could weaken Santorum by continuing to divide the conservative vote among several candidates.

"He understands the numbers," the source said explaining if Gingrich did leave the primary race he believes many of those supporters would support Santorum.

"Adelson is certainly giving Gingrich one more chance. But given Gingrich's poll numbers, Adelson's cash infusion is more about knocking Santorum from the top of the polls than it is about boosting Gingrich's chances. While Adelson supports Gingrich, he is concerned that Santorum could win the nomination over Romney," said Ford O'Connell, a Republican strategist who is not backing any candidate in the primary.

Adelson has told associates his major motivation is to see Barack Obama defeated in the general election, as CNN previously reported. Adelson met with Mitt Romney on February 3 while he was in Nevada campaigning for the caucuses and has also spoken to him by phone.

Adelson "has assured Romney that he will be behind him 100% should he become the nominee," one of the sources previously told CNN.

Both of CNN's sources could not speak on the record because Adelson wants his decisions kept private.