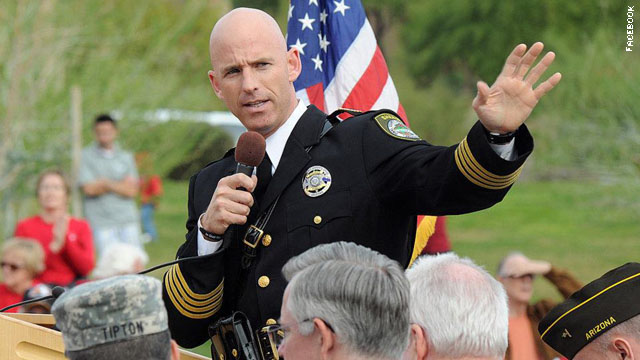 Pinal County Sheriff Paul Babeu denied the allegations during a press conference Saturday. He was co-chair of Romney's campaign in Arizona and is a candidate for Congress in the state's fourth district.

"I'm here to say that all of these accusations that are in one of these newspapers are absolutely false," Babeu said outside his office, "except to the issues that refer to me as being gay."

Babeu's former boyfriend alleged in a Phoenix New Times report published Thursday that Babeu and his attorney threatened him with deportation if the man revealed their relationship. Babeu said Saturday he had no reason to believe that the man, identified in the news report only as Jose, was an illegal immigrant. The New Times reported the man is originally from central Mexico.

The sheriff said Saturday that the man was also a volunteer on his congressional campaign, and when their relationship failed, Babeu alleged the man took control of campaign social media and committed identity theft. Babeu said at the press conference that his attorney contacted the man, who contacted his own lawyer after feeling threatened by contact from Babeu and his attorney.

Jose is living "in fear," his lawyer told CNN in a statement.

"Jose retained our law firm after he was contacted by Sheriff Babeu's attorney, because he felt intimidated and needed someone to help protect his rights," Melissa Weiss-Riner said on Saturday. "As a campaign volunteer, our client created and maintained several websites and accounts at Sheriff Paul Babeu's request. The websites and accounts were created and maintained for Sheriff Babeu from approximately 2008 through late 2011.

"Jose continues to live in fear, and is currently in the process of moving again. Therefore, he is not available to speak with the media at this time," she continued.

However, Chris DeRose, the lawyer and campaign manger for Babeu, told CNN he never threatened Jose or indicated in any way that he could be deported if the relationship with the sheriff were made public.

"I've never spoken to the guy on the phone or met him in person," DeRose said. "I never threatened his legal status or anything else.”

DeRose said he sent an email to Jose last May, asking him to turn over all usernames and passwords to the campaign website. The only other time he communicated with Jose, DeRose said, came when he sent a cease and desist order after the campaign’s Twitter account was hacked in September. Joe responded with the following statement, agreeing to the terms.

"The guy was already accused of breaking several federal laws," DeRose said. "Why would I need to threaten his legal status?"

Jose’s lawyer would only say the Mexican national currently resides in the U.S. legally but declined to address whether he has always had legal status here.

At the press conference on Saturday, Babeu vowed to continue his campaign for U.S. Congress and serve out his "four-year term as sheriff with a bang." He was elected in 2008.

He was joined at the press conference by colleagues and associates who defended his character and underscored his assertion that the matter was a personal one.

Babeu has appeared alongside Romney on the campaign trail, and alongside Arizona Sen. John McCain in a pro-immigration television advertisement which McCain aired during his tough primary campaign in 2010. Babeu also spoke earlier this month at the Conservative Political Action Conference in Washington.

"Sheriff Babeu has stepped down from his volunteer position with the campaign so he can focus on the allegations against him," Saul said. "We support his decision."

On Sunday, McCain described Babeu as a friend, adding he didn't know any more details than what has been reported in the media.

"All I can say is that he also deserves the benefit, as every citizen does, of innocence until proven guilty," McCain said on ABC's "This Week." "But I appreciate the support that he gave me in my campaign and always will."

The sheriff said he called the Romney campaign to offer his resignation, and said he was not asked nor pressured to resign.