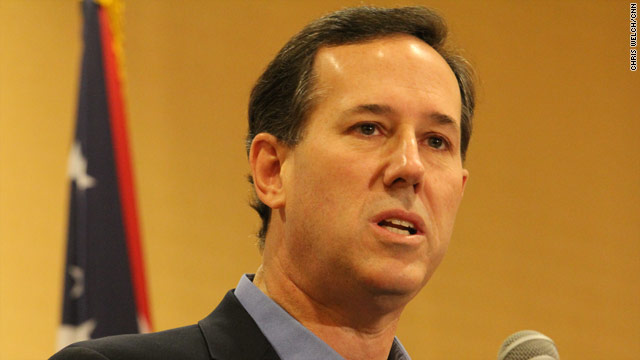 His comments came as he went into his common riff: that Romney, a former Massachusetts governor, is unfairly attacking him over the issue of earmarks.

“One of his strongest supporters, John McCain, called it potentially the worst boondoggle in earmark history,” Santorum said. “And now Governor Romney is suggesting ‘Oh, Rick Santorum earmarked’ as he requested almost half a billion dollars in earmarks as governor of Massachusetts to his federal congressmen and Senate members.”

“Does the word hypocrisy come to mind?” he added.

The Romney campaign was quick with a rebuttal.

“Sometimes when you shoot from the hip, you end up shooting yourself in the foot,” said spokeswoman Andrea Saul. “There is a pretty wide gulf between seeking money for post-9/11 security at the Olympics and seeking earmarks for polar bear exhibits at the Pittsburgh Zoo. Mitt Romney wants to ban earmarks, Senator Santorum wants more ‘Bridges to Nowhere.’ ”

Santorum was speaking to a room of tea party enthusiasts in Columbus, Ohio. He was kicking off a busy day on the trail in the battleground Buckeye State, with another rally in Columbus, and later, one in Akron.

It all comes on the heels of what the campaign considers a pretty major endorsement Friday - that of Ohio attorney general and former Romney backer, Mike DeWine.