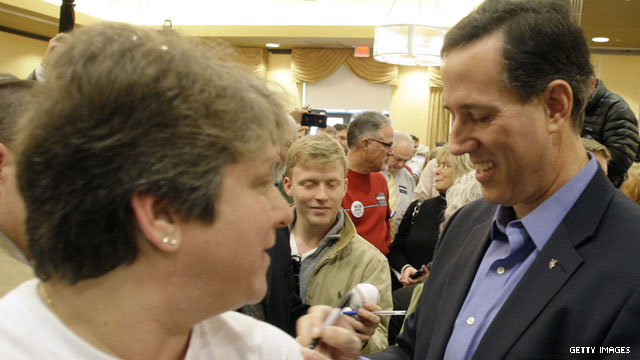 According to the poll released Sunday, 36% of registered Republicans said they are backing Santorum, while 28% prefer Romney.

The new numbers represent a five-point drop for Romney since Wednesday, when the candidate was statistically tied with his opponent, 33% to 31%. Meanwhile, Santorum has jumped five points in the same time period.

The survey was conducted Tuesday through Saturday, more than a week after Santorum snatched a trio of victories in Missouri, Colorado and Minnesota. One day before he pulled the big upset on February 7, Santorum was in third place in the daily tracking poll with 16%.

Romney's campaign, as well as a super PAC supporting his candidacy, have since taken a visible turn in strategy, attacking the surging candidate through surrogates, interviews and ads.

Both presidential hopefuls are now in a bitter match over Michigan's upcoming February 28 primary. While the state represents home territory for Romney, who won the state in the 2008 primary and whose father once served as governor, Santorum plans to launch an aggressive campaign and already tops polls measuring support in the state.

According to Gallup, Gingrich came in third place with 13%, with Texas Rep. Ron Paul closely behind at 11%.

Both Gingrich and Paul have said they could envision a primary stretching out to the Republican National Convention, though Gingrich emphasized this weekend that Georgia will be a key Super Tuesday state to win for his White House bid.

"I tell people it's like the NCAA Final Four with no elimination. You could imagine all of us going all the way to the convention," Gingrich said to reporters in Washington on Sunday.

In the latest survey, Gallup questioned 1,187 Republicans and Republican-leaning independents by telephone February 14-18, with a sampling error of plus or minus three percentage points.