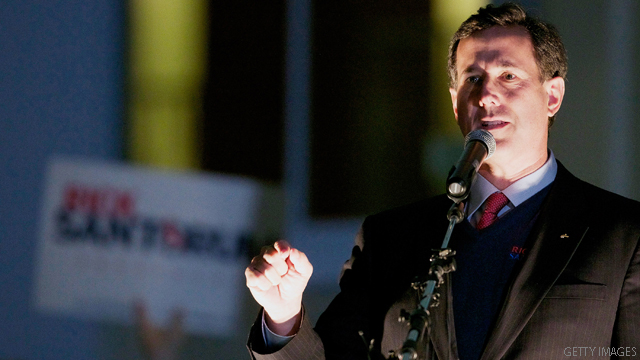 "Santorum is leading in the polls nationally – it would be crazy to ignore him at this point," a Democratic source with knowledge of the shift in strategy tells CNN.

The first email from the DNC blasting Santorum went out Sunday, following the television talk shows.

"Rather than focusing on jobs, the economy, or any of the issues that matter most to Americans, he discussed man's 'dominion over' the earth, repeated his patently false claim that prenatal health care is a plot to force more abortions, and questioned the need for public education," said the DNC press release.

"Rick Santorum has embraced the same philosophy that created the economic crisis. His tax plan would primarily benefit the very wealthy while adding $900 billion to the national deficit. And it would be a disaster for middle class families. Santorum has attacked the very idea of public education and criticized the Paul Ryan plan that would end Medicare as we know it because it did not go far enough. He opposed extending the payroll tax cut that saves the typical middle class family $1,000. And he opposed rescuing the auto industry which saved 1.4 million American jobs." argues the DNC.

Santorum's campaign says it welcomes the new criticism from across the aisle as proof their candidate is a serious contender for the GOP nomination.

"Barack Obama and the administration are attacking Rick Santorum because they see Santorum as a legitimate contrast on all the major issues. He can credibly attack the president on Obamacare, on big bank bailouts, on cap and tax legislation, and on Obama taking away religious liberties," said Santorum campaign spokesman Hogan Gidley.

Gidley also took it as an opportunity to take a swipe at Santorum's chief rival for the GOP nomination, Mitt Romney, saying the two men's records "mirror each other."