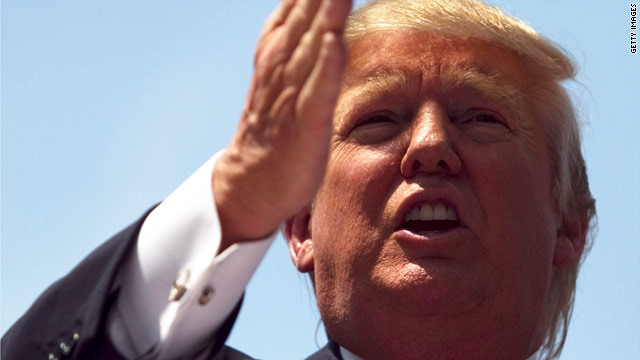 (CNN) – Donald Trump demonstrated Monday that he has no qualms about going after one of Mitt Romney's chief rivals, Rick Santorum.

"There's nothing - there's no gift, no Christmas gift, that could be given better than Rick Santorum to the Democrats," Trump said in a radio interview which aired in Michigan. Democrats, he continued, "are just salivating at that. And, you know, I don't think they believe it's going to happen. But boy, would they like it to happen because that would be an easy election."

Michigan votes one week from Tuesday, and Trump is scheduled to take to the state's airwaves daily this week to speak on Romney's behalf.

The perception of electability was a major factor in deciding to endorse Romney, Trump said, and Republicans would be foolish to put forward Santorum as their nominee because "he basically has no chance" of winning.

Trump considered a presidential bid himself, then nixed the idea, and in January tossed his endorsement to Mitt Romney. If Santorum were to win the Republican nomination, Trump suggested Monday that he would consider a run.

"If he doesn't, and I hope that doesn't happen," Trump said of a Romney loss, "I would say there's a good possibility that I would do something, yes."

The two have not appeared in public campaigning together since the event announcing the endorsement, but made fundraising phone calls together last week.

Shortly after the endorsement, which took place at a Las Vegas hotel owned by Trump ahead of the Nevada caucuses, Santorum suggested his recommendation carries little weight.

"I'm sure he just wanted some publicity for his casino down in Las Vegas," Santorum said. "I think the people of Nevada are smart enough to figure out who they're going to vote for and it's not going to be based on what Donald Trump recommends."