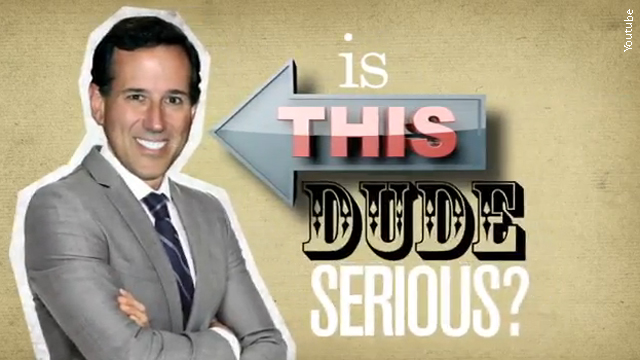 Paul's campaign is going up with a new lively and energetic television commercial in Michigan titled "Fake" that questions Santorum's fiscal conservative credentials.

"Is this dude serious? Fiscal conservative? Really?" asks the narrator in the ad. "Santorum voted to raise the debt ceiling five times, doubled the size of the Department of Education, then supported the biggest entitlement expansion since the 1960's. Not groovy. Santorum voted to send billions of our tax dollars to dictators in North Korea and Egypt, and even hooked Planned Parenthood up with a few million bucks. Rick Santorum a fiscal conservative? Fake."

The campaign of the longtime Texas congressman tells CNN they are spending six figures to run the spot in Michigan on cable television, and they say the ad will be part of a rotation of commercials in Super Tuesday states that they'll be announcing soon.

The Santorum campaign was quick to respond, with national communications director Hogan Gidley telling CNN that "for all of Ron Paul's blustering about conservatism, the bottom line is that he's been in Congress for decades and has not had a single accomplishment to forward the cause of conservatism. Not one."

This isn't the first time that the Paul campaign has targeted the former senator from Pennsylvania, who thanks to his sweep of the three February 7th contests has surged to challenge former Massachusetts Gov. Mitt Romney for front-runner status in the race for the GOP presidential nomination. Last month ads by the Paul campaign portrayed Santorum as a corporate lobbyist and Washington insider. The Romney campaign, as well as an independent super PAC that's supporting Romney, are also criticizing Santorum's record in Congress.